A matter of principles

Recent reports of a suspension of military cooperation between Indonesia and Australia were wildly exaggerated, but they emphasise the importance of proper intercountry linguistic, cultural and political understanding, Bradley Wood writes.

Indonesia’s official state ideology, the Pancasila, has re-emerged as a dominant feature in political rhetoric, while also being perceived as a vulnerable political target by Indonesia’s political elite during a very sensitive time in Indonesia.

It’s no surprise then, that the recent bilateral incident between Australia and Indonesia involving the alleged laminated display of the political send-up ‘Pancagila’ (the five crazy principles), along with other politically sensitive training material about Indonesia’s chequered past in West Papua provoked an official response.

There have long been suspicions among Indonesia’s political elite about Australia’s intentions regarding West Papua dating back to Indonesia’s independence. These continue to linger in the minds of some Indonesians because of Australia’s instrumental role in securing East Timor’s independence. This latest development has only raised the spectre of such pre-existing suspicions.

Recent political rhetoric in Indonesia has centred on reminding Indonesia’s citizens about its founding principles, namely the Pancasila—the five principles that make up Indonesia’s official ideology. This follows mass demonstrations backed by Indonesia’s Islamic hardliners in November and December last year, against the incumbent Jakarta Governor, locally known as Ahok, for alleged blasphemy. Various political forces within Indonesia have capitalised on these events in the run-up to next month’s regional elections, which includes the Jakarta Governor’s seat, now seen as an ascension pathway to the presidency.

Inaccurate reporting of the ‘Pancagila’ incident, based on the initially limited coverage in the Indonesian press, gave rise to a public perception in Australia that it had caused a significant suspension in military cooperation between the two countries. The Australian media continued its media frenzy even after a detailed press conference by the outspoken Commander of Indonesia’s military (TNI) General Gatot Nurmantyo. This further fuelled the speculation of a blanket freeze on military cooperation, despite Gatot’s emphasis on the good relationship he has with the Chief of the Australian Defence Force (ADF), Mark Binskin.

This media controversy, however, has since been adequately framed as a miscommunication between the TNI, the Ministry of Defence, and the Presidential Press office. A belated press release was eventually produced by the Coordinating Minister for Politics, Law, and Security, and former Commander of the TNI, Wiranto. This clarified the Indonesian Government’s position—that only a specific language training program between the two countries had been temporarily suspended.

The ‘Pancagila’ send-up that was reportedly sighted by an Indonesian language trainer at the Campbell Barracks in Perth, however, was not an Australian creation. Last year, an Indonesian court chose not to impose criminal sanctions after an Indonesian activist posted the Pancagila principles on Facebook, signalling an historic moment for freedom of expression in Indonesia. It has also been widely used on social media by a number of Indonesian-associated accounts that date back to at least 2011. 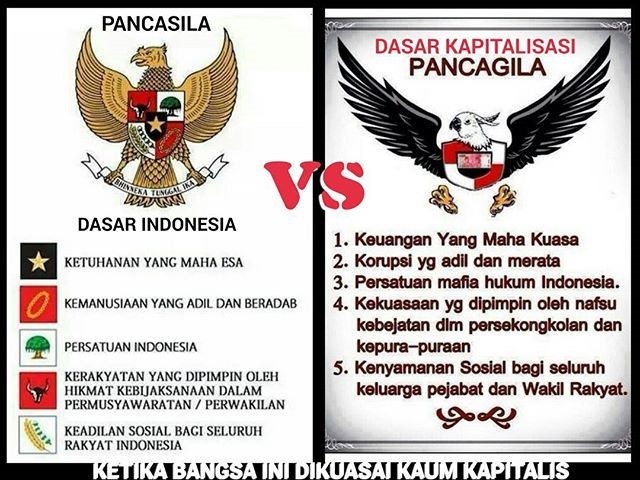 Translated (see image), it reads: Belief in the one and only God / The Financial Almighty; Just and civilised humanity / Corruption that is fair and equitable; The unity of Indonesia / The unity of the political elite within Indonesia’s legal system; Democracy guided by the inner wisdom in the unanimity arising out of deliberations amongst representatives / Power which is led by lust and depravity in the conspiracy of hypocrisy; and, Social justice for all people of Indonesia / Social security for the whole family of officials and representatives.

There is no doubt that the public display of such content at a language training facility at the Campbell Barracks—where it would be seen by Indonesian defence colleagues—was a significant political mistake, with potentially serious implications for the bilateral defence relationship.

However, the use of sensitive political material, such as ‘Pancagila’, by the ADF’s language students is important to Australia’s official language and cultural training. Politically sensitive material like this provides a valuable insight into Indonesia’s internal political dynamics from an indigenous perspective, and it’s these insights that contribute to a better understanding of Indonesia’s human terrain.

Towards a new Australian security: why inclusiveness is the key

The outcome of an inquiry by the Chief of the Australian Army, Angus Campbell, is likely to have already been delivered, and there have been reports that indicate Australian defence personnel have already been reprimanded. It is important, however, that the Australian Army evaluate these language materials beyond their politically sensitive attributes, as they improve their linguistic and cultural understanding about their largest neighbour and, arguably, their most important non-aligned defence relationship—where respective interests often differ, but can also be managed.

With such a diverse makeup in Indonesia, SARA tensions—a security acronym used to explain ethnic, religion, race, and inter-group inspired conflict—will likely continue to be a part of the internal dynamics of Indonesia’s democratic process. The challenge for Indonesia will be managing these tensions within the confines of its post-reformasi democratic limits, without using the extreme concept of an external proxy war involving Australia, to build its national cohesion. However, reminding Indonesia’s large population about Pancasila and Indonesia’s national motto Bhinneka Tunggal Ika (Unity in Diversity) may play an effective role here.

Indonesia continues, however, to face internal challenges to the Pancasila ideology by hard-line Islamic groups, such as the Islamic Defenders Front (FPI). These groups have also recently been trained by the TNI’s district command, albeit without official approval, as part of Indonesia’s civil defence program known as Bela Negara. Gatot Nurmantyo, however, has defended the right of the FPI to participate in the civilian defence training and there has been at least one approved incident of FPI members engaging in civil defence training that dates back to 2014.

While this is only basic civil defence education centred around building a sense of patriotism, national awareness, and belief in the Pancasila ideology, it demonstrates the complexities of Indonesia’s policy response to uniting such a diverse population. In this case, it appears that the TNI is playing an active role, and it’s therefore within the ADF’s purview to understand this development in its entirety.

The ADF needs to pay attention to these internal dynamics and political sensitivities in Indonesia to prevent any miscommunication when it comes to Australia’s laid back sense of humour regarding world politics. However, preventing the use of politically sensitive material across all ADF Indonesian language programs, risks limiting the ADF’s nuanced understanding of current developments impacting on the internal security of a very important archipelagic neighbour.