China is seeking to create a domestic sports industry worth $800 billion, and at the heart of that is the country’s ambition to lift football’s World Cup

When it comes to football, China has been a perennial underachiever – with an under-performing national team and a league beset by corruption – but that could all be about to change, as Simon Chadwick writes.

For Chinese sport, 2015 has been a fast-paced year that has involved staging events such as the World Athletics Championship. In addition, Beijing recently won the right to host one of global sport’s biggest mega-events – the 2022 Winter Olympic Games. Yet the latter now seems almost incidental to what has been happening more generally across Chinese sport during the last 12 months.

While 2022 will no doubt help seal China’s position at the world’s top-table of sporting nations, it is the Chinese government’s December 2014 announcement about the nation’s sport industry that has dominated the year. By 2025, the People’s Republic is seeking to create a domestic sports industry worth US$800 billion, which will account for 1 per cent of GDP. This is an ambitious target, as Chinese sport currently accounts for only 0.6 per cent of GDP, while the entire global sport industry is currently only worth US$145 billion.

At the heart of China’s desire to become a sporting superpower is football. The sport has always been something of an embarrassment for China, beset by corruption and with its teams grossly underachieving at all levels. Upon his arrival in office, President Xi Jinping instigated a purge of corrupt football officials and now it seems he is set on China becoming a global football force, both on the field and off it. 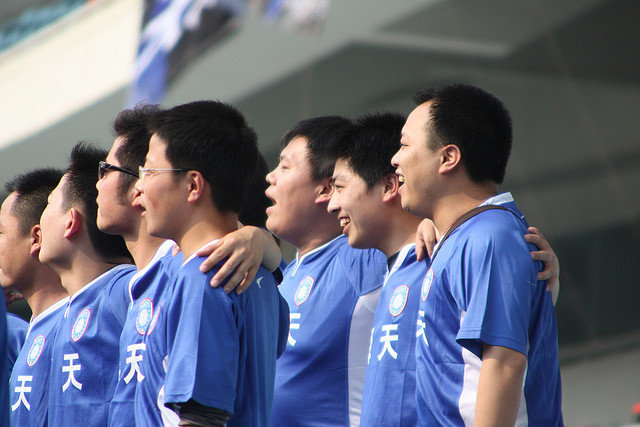 A bid to host the FIFA World Cup will come and Xi is seeking ultimately for China to win the tournament. It is important that the People’s Republic embraces and is successful in the people’s game. The effects of hosting and winning the World Cup should not be underestimated; ask the Qataris, who are pursuing a similar strategy. There are multiple benefits, ranging from soft-power influence and nation branding opportunities, to the promotion of active lifestyles and the generation of business.

In some respects, what Xi has instigated is nothing new: the 2008 Beijing Olympics marked the re-launch of Brand China, while the country has been engaged in ‘stadium diplomacy’ for more than a decade. This has entailed funding sports stadium construction projects in return for access to natural resources in Africa and elsewhere. But the recent scaling-up of its goals indicates that China sees sport as an important means through which to extend its global influence.

Already this year, there is tangible evidence that China really does mean business. While the state is investing heavily in, for example, talent development (through more robust approaches to sports coaching in schools), it is China’s entrepreneurial lieutenants who are leading the charge towards 2025. Two individuals in particular standout: Wang Jianlin and Jack Ma.

Wang is Chairman of the Dalian Wanda Group, China’s largest real estate developer and the world’s largest movie theatre operator. Already this year he has acquired a 20 per cent stake (US$52 million) in Spanish football club Atletico Madrid, stating that it will become part of a global entertainment axis stretching from Beijing to Los Angeles. Wang has also recently bought the World Triathlon Corporation for $650 million and the Swiss-based sports marketing company Infront Sports & Media AG, for $1.2 billion.

At the same time, Ma (founder of the e-commerce corporation Alibaba Group Holding Limited) has purchased 50 per cent of Chinese football club Guangzhou Evergrande for US$192m. In recent weeks, Ma has extended the corporation’s sports portfolio by launching Alibaba Sports and Entertainment. And he is not alone in his aggressive pursuit of sport – for instance, football clubs across Europe (two examples being FC Sochaux of France and ADO Den Haag in the Netherlands) have been acquired by Chinese investors this year.

In one sense, China, its government and its acquisitive entrepreneurs are doing nothing particularly notable. After all, the sport industry has proliferated in size over the last two decades hence they are following rather than bucking a trend. However, the scale of China’s ambition and speed with which the country has set about pursuing its targets is, on paper at least, breathtaking.

Indeed, the ‘sports grab’ now taking place is reminiscent of the ‘internet grab’ for which China has become noted in recent years as its online platforms have aggressively pursued growth. This explains Ma’s sudden engagement with sport, the convergence of sport, entertainment and the internet being an obvious opportunity for Alibaba. Similarly, the country’s ‘resource grab’, played out through strategies like stadium diplomacy, provides some insights into those like Wang who are keen on securing natural resources such as land.

It will remain a moot point for some time yet whether or not China will reach its 2025 goal: this is market-making on an epic scale and a unique model of state-led, entrepreneurially conglomerated sport. However, if the country does reach its target, then Chinese sport will account for most of the world sport economy’s size (possibly as much as 75 per cent). In which case, by that time, we may all have to accept the inevitability of a hitherto unlikely Chinese football World Cup win.