With a state election coming up in March, it is time to turn attention once again to the undemocratic farce which is the Western Australian Legislative Council.

The Upper House in Western Australia remains the only legislative chamber in the country subject to massive distortions which value some votes at six times the value of others!

Having grown up in Perth, I am aware that the situation used to be worse. And I understand that the key chamber, the Legislative Assembly, has been substantially reformed.

But nothing can hide the fact that in one part of the State it takes only 68,000 people to elect six Legislative Councillors, while in the south of the metropolitan area it needs more than 408,000 to elect the same number of members. (Click here to see table). 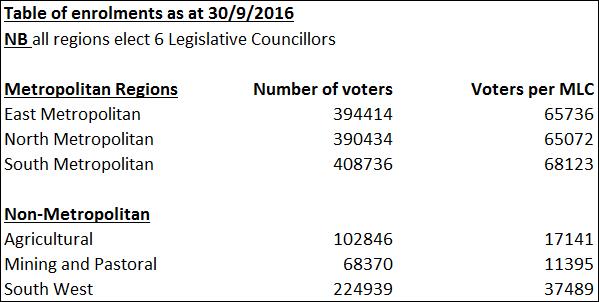 This is the most significant distortion, but it is also the case that voters only 65 kilometres from Perth wield a voting power almost twice that of their neighbours.

Self-evidently this is not only undemocratic but also blatantly unfair. The interests and opinions of some Western Australians carry six times the weight of others.

Of course, I understand that the alternative argument is that this outrageous vote malapportionment is justified by the remoteness of some parts of the State. I do appreciate that the citizens of some of the most remote parts of the state have special problems which require attention.

However, those special problems cannot be an excuse for vote rigging. Such special issues do warrant special administrative arrangements and funding allocations. The history of appalling treatment of the state’s most remote citizens, Indigenous Australians, makes it clear that vote weighting is not the appropriate response to questions of isolation or remoteness.

For example, something magical happens on the 5-kilometre drive from Singleton to Madora Bay, two suburbs south of the city.

In Singleton, the “unworthy” voters are in the South Metropolitan Province, and it therefore takes 68,000 of them to elect an Upper House member.

However, the “worthy” citizens of Madora Bay have the good fortune to be in the South West Province which means it only requires 37,000 of their votes per Legislative Councillor.

I haven’t driven down that road for a few years but I don’t recall anything in between the two that would justify such a vast difference in representation.

It is too late to change the electoral boundary requirements for this election.

But it is important that voters have information about what all the parties running for election will do about this outdated and anomalous situation during the next term of the State Parliament.

It is not just the major parties which need to provide an answer.

After all, it was the Greens who were a key part of the legislative compromise which came up with the existing arrangements. With One Nation standing a reasonable chance of winning some upper house seats they will also need to indicate whether they will be part of the solution or part of the problem.

One vote one value is one of the most fundamental of democratic requirements.

It is long past time that Western Australia caught up with the 21st century and gave up their “horse and buggy” electoral malapportionment in the Legislative Council.

Bob McMullan is a Visiting Fellow at Crawford School of Public Policy, following a long and distinguished career in the Australian Parliament as one of Australia’s pre-eminent Labor politicians. He is a former Executive Director to the European Bank for Reconstruction and Development.