Vaccinations, borders, and the Delta variant

The human and economic costs of continuing the current vaccination strategy

June’s outbreaks of COVID-19 in Australia highlight the real dangers of the Delta (B.1.617.2) variant of SARS-CoV-2, the virus that causes COVID-19.

In the past month, there have been several separate COVID-19 outbreaks involving the Delta variant of SARS-CoV-2 in Australia. The first outbreak, in Melbourne, arose from a leak in the hotel quarantine system, and appears to have been successfully eliminated. The second outbreak, linked to the transport of international aircrew in Sydney, has yet to be contained and there are also smaller outbreaks in Queensland, the Northern Territory, Western Australia, and South Australia.

Crucially, the Delta variant is in the Australian community. It is highly transmissible and more virulent than previous strains of the virus. It is at least 40 per cent more contagious than the Alpha variant (B.1.1.7) that was responsible for the second wave in the United Kingdom. It is also more likely to result in hospitalisation.

The Delta variant is now dominant in India, and played a key role in the devastating second wave in that country. In the United Kingdom, it completely replaced the Alpha variant in just a few months, and now accounts for 99 per cent of new cases there.

The European Centre for Disease Prevention and Control has forecast that the Delta variant will account for 90 per cent of new infections in the rest of Europe by the end of August.

A plan to more or less completely remove restrictions in England has been postponed until July in response to what appears to be a third wave of cases. The Delta variant has been responsible for these very large increases in new daily cases in the United Kingdom which, as of 29 June, were at 20,479. This amounts to 125,141 over the previous seven days and a 73 per cent increase from the previous week, and the largest number since the end of January 2021.

New daily fatalities, as of 29 June, were 23 (118 over the previous seven days), despite the United Kingdom having 62 per cent of its adult population fully vaccinated and 85 per cent having received at least one dose of a vaccine.

At least two infections from Sydney’s current outbreak resulted from fleeting contact. This explains why the number of people that someone with the Delta variant of the virus can be expected to infect, the reproduction number (R0), ranges from five to possibly as high as eight, while the original strain’s R0 was probably about 2.5.

This increase in contagiousness means that the virus spreads much faster, and that measures that were previously able to eliminate community transmission of the original strain may no longer be as successful.

Democracy Sausage: Does Australia’s vaccine rollout need a shot in the arm?

The best long-term protection against the Delta variant, or any other strain of the virus, is full vaccination of the global population, notwithstanding the fact that there will always be vaccine breakthroughs and none of the available vaccines are 100 per cent effective against severe symptoms or death.

Full vaccination of everybody, everywhere, as soon as possible with the most effective vaccines offers the greatest chance of ending the pandemic.

This is because people fully vaccinated with the best available vaccines have a substantially reduced likelihood of infecting others.

Vaccines not only prevent most people from becoming infected, but also reduce viral load if a breakthrough infection does occur and make it less likely that the virus will evolve into new variants.

Australia, for its part, has ordered 40 million Pfizer vaccine doses – enough to fully vaccinate all adult Australians – with supplies expected to increase to about one million doses per week in September 2021. It has also ordered 25 million Moderna vaccine doses, with about 100,000 doses per week expected from September 2021, and 51 million doses of Novavax, sufficient for every Australian, expected to be delivered from early 2022.

In the interim though, there are insufficient supplies of Pfizer to meet vaccination demand. Consequently, people younger than 60 years have been prioritised for Pfizer vaccination.

As we have noted elsewhere, mRNA vaccines like Pfizer and Moderna are more effective and safer than AstraZeneca. Thus, in an ideal world with no supply constraints, all Australians would be vaccinated with Pfizer or Moderna.

mRNA vaccinations would decrease the number of Australians who would get sick and reduce community spread of the virus whenever there is an outbreak. If everyone were fully vaccinated with mRNA vaccines then Australia may even achieve herd immunity, such that when outbreaks occur, as they will when the international border opens, the chain of transmission is disrupted, and case numbers do not grow exponentially.

We compared the public health and economic consequences of opening the international border noting that, despite multiple outbreaks from quarantine, an elimination strategy with border controls, contact tracing and social distancing have, so far, been effective at preventing a ‘second wave’ national outbreak.

In our calculations we assumed Australia maintains its current vaccination strategy, such that those aged 60 years and over only get vaccinated with AstraZeneca and almost everyone else gets Pfizer.

A summary of our results is given in the Figure below, where the vertical axis is the percentage of the population fully vaccinated and the horizontal axis is the estimated percent effectiveness of two doses of the vaccines against transmission.

The results show that because of its much higher R0, it is impossible to achieve herd immunity against the Delta variant using only AstraZeneca, indicated by the blue vertical line. On the other hand, herd immunity can be achieved with the Pfizer vaccine, indicated by the green vertical line, but only if around 90 per cent of all Australians – not just adults – are vaccinated.

The effectiveness of the mixed strategy is indicated by the red vertical line, which is a weighted average of the effectiveness for Pfizer and AstraZeneca, assuming approximately two-thirds of Australian adults receive Pfizer.

Crucially, the red vertical line and black (R0 = 6) lines never meet. Even with 100 per cent of the population fully vaccinated, the mixed vaccination strategy will not deliver herd immunity against the Delta variant. 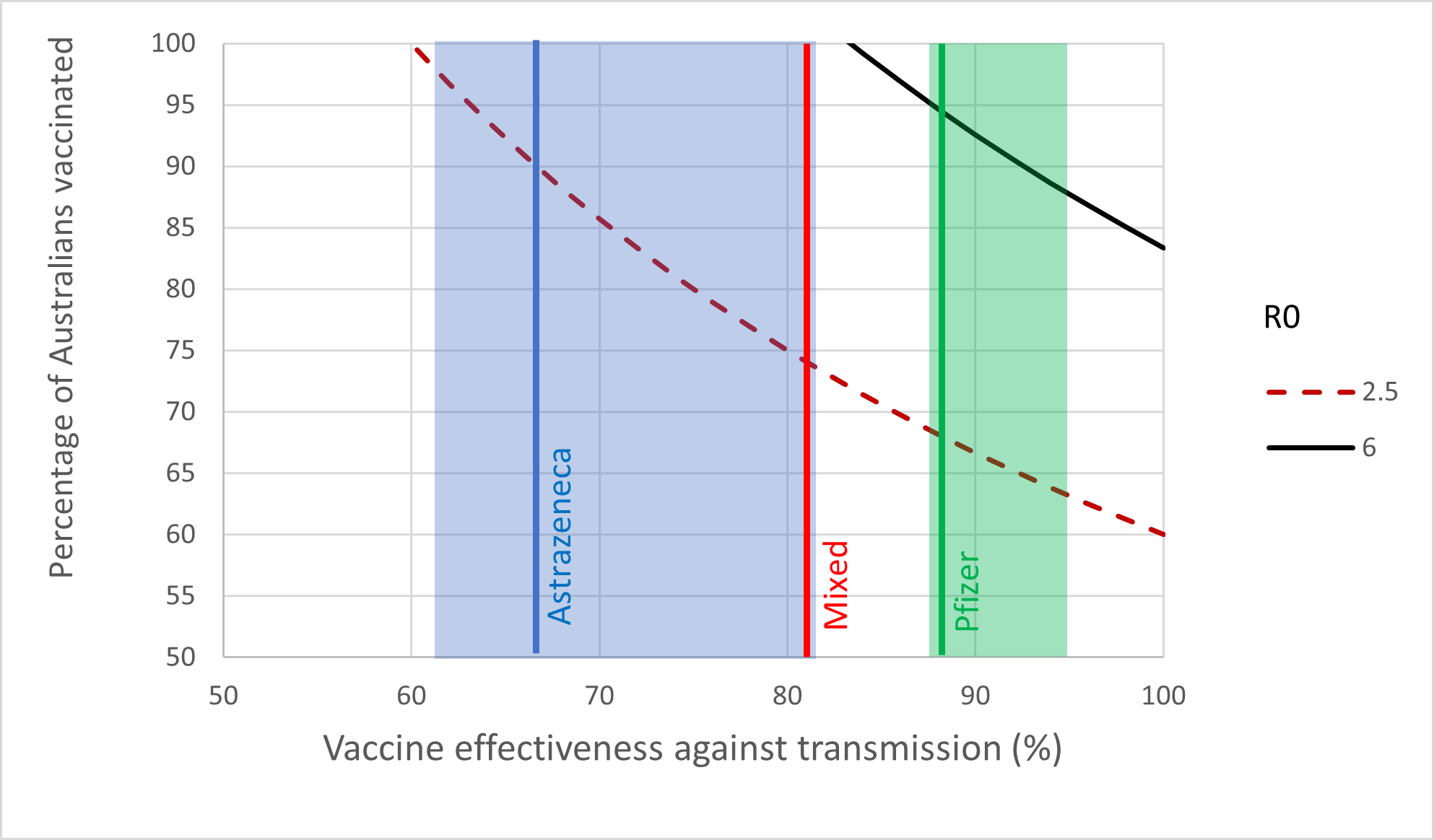 Vaccine hesitancy has multiple causes, including the perceived safety and effectiveness of vaccines, as well as trust in public institutions.

Based on recent surveys, 26 per cent of Australian adults may be unlikely to get vaccinated as part of the current vaccination rollout. About half, or 13 per cent, stated that a key reason was because of their nervousness about vaccination side-effects. Nearly a third, representing around nine per cent of Australians, said they were waiting for more people to be vaccinated, indicating they may be willing to get vaccinated as the rollout progresses.

In the case of the AstraZeneca vaccine, hesitancy has increased because of a rare, but serious, blood clotting issue – thrombosis with thrombocytopenia syndrome (TTS) – caused by vaccination. To date, there have been 64 confirmed and probable cases of TTS in Australia, many of whom have been hospitalised, and there have been two Australian TTS-related fatalities.

As a result of TTS risks, AstraZeneca is now only recommended for persons aged 60 years or older in Australia. The primary justification given for the continued use of AstraZeneca in older Australians is not that they are at lower risk of complications, but that COVID-19 is a bigger threat to their health.

That is, according to the current health advice, the benefits of preventing COVID-19 for older Australians outweigh the risk of harm from TTS. Thus, given there is currently insufficient supply of the alternative Pfizer vaccine, the public health advice is that older Australians are recommended to receive only the AstraZeneca vaccine.

Assuming the Delta variant is the dominant strain when Australia’s international border fully opens, we calculated the additional hospitalisations and fatalities that are likely to result from the mixed vaccination strategy versus the mRNA strategy.

This comparison found that in the absence of any change in the mixed vaccination strategy, fully reopening the international border would eventually lead to an additional one million COVID-19 cases in Australia.

Based on parameters, in part, from limited studies comparing AstraZeneca and Pfizer in relation to the Delta variant, we estimate the mixed vaccination strategy could eventually cause an additional 81,000 hospitalisations and some 30,000 fatalities.

Most of the fatalities are in the 60-plus age group, who suffer much higher fatality rates from COVID-19 and who would have received the least effective vaccine in the mixed vaccination strategy.

Given uncertainty of the effectiveness of both vaccines to the Delta variant these numbers are preliminary and will need to be updated as more data and additional results become available.

These public health outcomes would have an economic, as well as human cost that can be estimated using Australian data. We estimated the extra economic cost from the mixed vaccination strategy with 85 per cent fully vaccinated would roughly be between $84 and $114 billion.

This would encompass some $81.6 to $111.7 billion in mortality costs and at least $2.6 billion in hospitalisation costs. These estimates do not include the costs associated with the development of long COVID-19 and other chronic health problems that affect some people following infection.

he bottom line from both a public health and economic perspective is that Australia should not fully open its international border until all Australians are vaccinated with the best available vaccines.

The cost of premature and full opening of the international border without first ensuring eligible Australians have had two doses, or a booster, of the most effective mRNA vaccines is simply too great. It risks overwhelmed hospitals, thousands of fatalities, many more thousands who recover but are left with chronic health problems, and a huge, avoidable, economic cost.

John Parslow is an independent modelling expert based in Tasmania.