A class of their own

What the My School website data tells us about Indigenous students

In a recent article, Chris Bonnor outlined what Australia’s My School website data tells us about the disparities between schools. In this article he illustrates what this means for Indigenous students.

We now know more than ever about the gaps between Australian schools. In one way or another, our school system is creating separate and sometimes lesser opportunities for Indigenous students, as well as for more recent arrivals, for the less advantaged, and the less academic. We are arguably recreating social class in our schools as well as increasing the gap between schools and their communities.

There was never a golden era when all schools were places where children were in diverse classrooms, mixing with those from different backgrounds. We may have gone closest, beginning in the late nineteenth century, with the creation of inclusive public schooling.

But early this century Barry McGaw, a leading educator, analysed global trends in schooling and pointed to how Australian schools frequently divide on the basis of gender, faith, social background, wealth, and geography. It is schooling, he said, not school, that is the common experience.

The Centre for Policy Development is taking a closer look at what this might mean for students, schools and communities.

‘My School’ tells a story of growing educational inequity inequality

As we well know, Closing the Gap between Indigenous and non-Indigenous Australians is a high profile and arguably high stakes priority. A key question in education – one that is almost never asked – is can we lift Indigenous achievement when we are increasingly consigning most Indigenous students to schools with the least capacity to achieve the desired breakthroughs? Because that is what we are doing.

Most Indigenous students attend schools at the bottom end of the school socio-educational advantage (SEA) ladder, a hierarchy illustrated by each school’s socio-educational index on the My School website. Over the last five years alone the increase in Indigenous enrolments in the most disadvantaged government and Catholic schools has been greater than in all other schools combined. (Click to see chart) 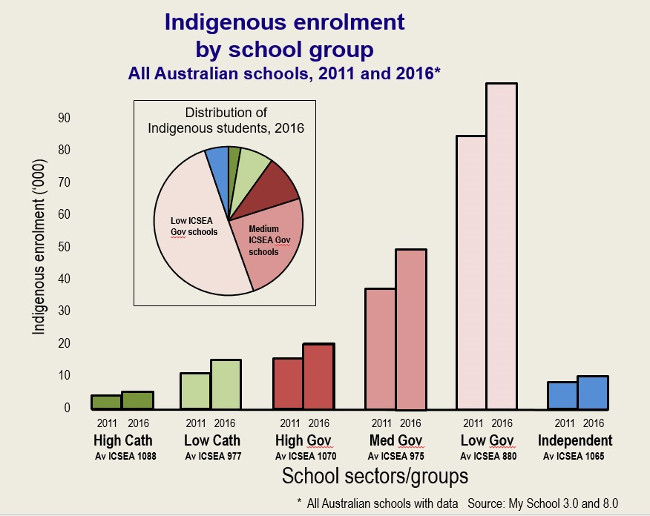 In part, this distribution of Indigenous students is a product of geography, but it is also created by how school choice operates in Australia. It a regressive hierarchy: those who can relocate or pay school fees will scramble up the ladder; those who can’t increasingly find themselves in residualised schools.

A small but significant, and increasing, number of Indigenous Australians are now well placed to exercise the same school choices taken up by other Australians. As a consequence, when it comes to schooling we are now seeing layers within and between Indigenous communities, just as we see with other Australians.

How does this affect schools and the students who attend them?

Schools with students who are more advantaged accumulate the social, cultural and even financial capital of their supportive and resourceful parents. Schools which enrol an increasing proportion of disadvantaged students gradually lose the resource of higher-performers and role models. As higher performing students leave, teacher experiences and expectations, as well as curriculum offerings, can change, and resources might become scarce. Teachers increasingly have to consolidate skills and knowledge some of their students have already traversed. The odds against making the much-needed breakthroughs in a child’s educational journey mount up.

Most Indigenous students attend schools well down the socio-educational ladder. These are mainly lower-SEA government and Catholic schools and some remote Independent schools. The government schools face the biggest challenge because, as indicated in our report, A Creeping Indigenous Separation, the two private sectors enrol the more advantaged students from Indigenous communities.

It helps the schools tick one equity box, but it reinforces the overall separation of students on the basis of socio-educational advantage. This isn’t about blame, it is just how the system works.

There are also urban-regional contrasts: the trend to residualise Indigenous students is magnified in regional areas where a majority of them attend school. The most disadvantaged regional schools have the highest Indigenous enrolments. The reality for these schools is that there is no one ‘below’ them on the school ladder. They lose their more advantaged students to schools on the higher rungs and must accept anyone on the way down.

This is also more noticeable outside the cities because the successful and the strugglers live almost side by side, but their children often go to very different schools.

Charting a course for Australian curriculum

Centres such as Coffs Harbour, Orange, Tamworth-Gunnedah and Wagga Wagga offer a considerable choice of schools. What is sometimes a black-white divide is not so much a matter of active discrimination; it is the level of school fees which sorts everyone out. There are very few Indigenous students in Anglican schools, more in community Christian, Catholic and higher-SEA government schools – but most are in other government schools.

Why does educational inequality matter? It matters because it impedes what could be progress towards closing the gap.

What the My School data highlights is an unhappy racial aspect atop longstanding, if loose, layers of social class. This racial component to educational inequality inhibits the development of interpersonal understanding and social harmony. It limits the development of social and cultural capital. Schools become less able to address the most intractable problems faced by many Indigenous families. We just won’t improve equity for all if we persist in compounding disadvantage.

While an experience of schooling is shared by all, Indigenous and non-Indigenous children increasingly don’t share the same school.

Closing this gap needs to be part of the obligation of every school. We will only succeed if we increase the number and proportion of our schools which are obliged to be open to children from every family, in every circumstance, in every part of Australia.

Chris Bonnor AM is a retired secondary school principal and author, and Fellow at the Centre for Policy Development.