A feast for wolves

From football to movies to Indian cricket, Wang Jianlin’s Wanda Corporation is leading a pack of business interests with the aim of building an entertainment empire stretching from China to Hollywood, Simon Chadwick, Paul Widdop and Dan Parnell write.

Wang Jianlin is China’s richest man, his fortune derived from his ownership of the Wanda Corporation. Wang set up the company in 1988, originally to deal in real estate. Through a process of conglomeration, the business is now also active across the hospitality, retailing, tourism, entertainment and sport industries.

This has enabled Wang to accumulate a personal fortune worth more than US$30 billion, and to build a company currently generating upwards of US$40 billion each year. This is a long way from his origins; Wang started out as a member of the People’s Liberation Army, later becoming an administrator in a local government office in the city of Dalian.

Crucially, Dalian had its own football club, which was initially called Dalian Shipyards and later became Dalian FC (when it was taken over by the local government). In 1993, Wang acquired the club, renaming it Dalian Wanda. By the late 1990s, the football club had been sold again, although by this time Wang had already set about creating what has arguably now become the most influential business in world football.

Most people from outside China probably first became aware of Wang in early 2015, when Wanda purchased a 20 per cent stake in Atletico Madrid. At the time, the Chinese businessman talked of his intention to build a global entertainment business that would stretch from China to Hollywood. As the network visualisation below shows, Wang is following through on his intentions. 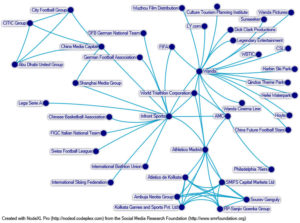 We have followed the same procedure here as we did when creating our previous visualisation for Fosun. The outcome of this exercise reveals a network that at one level is very simple: Wanda is heavily invested into activities that can be broadly categorised as ‘cultural industries’. At another level, the network is so complex and diverse that it shows how influential Wang and Wanda have become.

Just like our Fosun analysis, the Wanda network visualisation further demonstrates the importance of guanxi – broadly defined as networks, relationships and connections – in Chinese business. In this network, the right of the diagram depicts an array of predominantly Chinese relationships that underpin Wang’s vision of a global entertainment axis. Whether it is Disney in particular or Hollywood in general, Wanda is already challenging global entertainment’s existing order. Indeed, the ebullient Chinese businessman has recently said of Disney that “one tiger is no match for [my] pack of wolves.”

Equally important in Wanda’s network, however, is the role played by both Atlético Madrid and Infront Sports and Media (ISM). Purchasing Atlético cost the Chinese conglomerate US$52 million, and the company has also recently agreed to take-up a naming rights deal on the Madrid club’s new stadium. In recent years, Atlético have been through something of a renaissance, twice reaching the UEFA Champions League Final. Yet the broader network in which Atlético is embedded is possibly more important to Wang’s long-term strategy of building his entertainment empire via sport.

Many people will recall Ganguly as being one of India’s best ever cricketers as well as one of its most notable national team captains. However, he is now a member of Indian Premier League (IPL) cricket’s governing council as well as being president of the Cricket Association of Bengal. It is worth noting too that Ganguly’s fellow Kolkata group member, Sanjiv Goenka, is also owner of the IPL’s newest team – Rising Pune Supergiants.

IPL cricket is a phenomenon, capturing the attention (and the wallets) of sports fans in one of the world’s most populous nations. Television viewing figures for a round of IPL games are heading towards two hundred million, reinforcing cricket’s position as one of India’s leading forms of entertainment (alongside Bollywood films). And through its investments, partners and connections, Wanda is therefore invested into one of 21st-century sport’s biggest commercial properties.

Wanda paid US$1.2 billion for ISM in February 2015; the Swiss-based sports marketing company manages the marketing and media rights of several of the world’s leading sports organisations. One of ISM’s biggest clients is FIFA, specifically the World Cup, for which it produces television content. This is helpful to Wanda, given its entertainment ambitions, and to the Chinese government and its vision for football. Wanda also serves as a World Cup sponsor, which gives the conglomerate unprecedented access to FIFA’s top decision-makers. This is helpful for a nation intent on one day hosting world football’s biggest tournament.

With the 2022 Winter Olympics due to be held in Beijing, and with China intent on building a winter sport economy, it is helpful too that ISM also represents all seven Olympic winter sport federations, and manages media rights for the International Ski Federation’s World Cup events. This part of Wanda’s network of influence intensifies even further, as China Media Capital (CMC) and Shanghai Media Group (SMG) also have stakes in ISM. This links Wanda into the Abu Dhabi United Group, the China International Trust and Investment Corporation (CITIC), and the City Football Group (which owns a 13 per cent stake in Manchester City).

Beyond these important nodes in Wanda’s network lies a multitude of further, intriguing relationships. For example, there are links to controversial businessman Li Ruigang, who was president of SMG until 2011, a position he now holds at CMC. In another case, Wanda’s ownership of the AMC cinema chain extends the company’s network into the National Basketball Association (NBA) through an AMC board member who co-owns the Philadelphia 76ers.

If, as Wang has stated, his businesses are wolves, then he is without doubt leader of the pack. Indeed, as a voracious hunter who has accumulated massive corporate influence through his knowledge and understanding of guanxi, it seems likely that Wanda will not stop at hunting down Disney. Several of global sport’s leading properties, as well as some of Hollywood’s biggest assets (like Dick Clark Productions, which runs the Golden Globes) have already been gobbled-up. Expect the feast to continue for the foreseeable future.