The US/China climate initiative overshadowed the G20, but it is certainly not too late for Abbott to attempt to salvage some of his reputation on climate change, writes John Hewson.

Tony Abbott’s attempt to keep the issue of climate change off the Agenda of the G20 meeting in Brisbane this weekend was dealt a killer blow on Wednesday with the agreement between the US and China to lead the global push for an emissions reduction target/program. Hooray!

Even if Abbott manages to keep the formal discussion on climate to a minimum, the US/China climate initiative will overshadow anything that may actually be discussed or agreed at this weekend’s meeting.

It will also certainly dominate global policy discussions throughout next year in the lead up to the Paris climate summit (and beyond), and Abbott will be under increasing pressure to catch up, by dropping his Government’s climate denier stance, and making a genuine and significant commitment to reduce our emissions.

Abbott had wanted the primary focus of the G20 to be on economic growth and initiatives to achieve his target of increasing growth across the G20 countries by 2 percentage points above what would have been ‘business-as-usual’ over the next 5 years.

But, even on this, the ground has been moving against him with global growth forecasts being significantly downgraded since the target was launched back in February, with Chinese growth slowing, and Europe and Russia in particular teetering on the brink of another recession, and a number of G20 countries moving to be more protectionist in their trade policies. 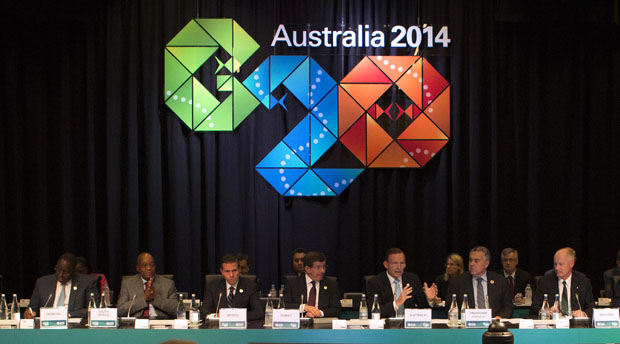 The danger is that the final Communique will be a lot of growth related rhetoric, especially around infrastructure projects, overlaying a grab-bag of initiatives, country by country, with little real or deliverable substance.

There has been far too much ‘posturing’ around ‘shirt fronting’, sideline diplomatic meetings, and promised trade deals, and far too little attention to policy detail.

The irony is that one of the most effective and deliverable initiatives, that could have gone a long way to giving some real substance to the growth target, is a climate positive initiative, namely energy efficiency.

The one initiative that the G20 could realistically commit to is a commitment to double energy efficiency over the next 5 years. It is deliverable, and growth and climate positive.

It is certainly not too late for Abbott to attempt to salvage some of his reputation, by offering something of substance this weekend. He is going to have to reverse his negativity on climate at some point. Why not seize the moment by showing some real leadership in this global forum?

Right now Abbott doesn’t have a climate policy, except for Direct Action, which is widely criticised as most unlikely to deliver even the very modest target of a five per cent reduction in our emissions by 2020, and at considerable cost.

He has also ditched the carbon price and the architecture for an emissions trading scheme, and still has the intention to dismantle other key climate institutions, such as the Clean Energy Fund and the Climate Authority.

He is also attempting to water down the Renewable Energy Target, even though that will cost growth, investment, and jobs, largely stalling the renewables industry.

His anti-climate stance, and associated ‘fear campaign’ may have been fundamental to his election win, but at enormous long-term cost to our nation.

How can Abbott defend his position that we can’t afford to leave our children, and their children, with the legacy of ‘debt and deficits’, nor with the expectation of an ‘age of entitlement’, but it’s quite OK to leave them with a climate risk that could not only destroy their lives, but also the planet?

This piece was published in Southern Highland News: http://www.southernhighlandnews.com.au/story/2694031/abbott-mugged-by-climate-reality/