Australia is not immune to biological threats

Why every government should have a biological and agricultural defence strategy

While Australia has been much more than just a ‘lucky country’ when it comes to biosecurity, it can’t afford to rest on its laurels, Paul Barnes writes.

Those who remember the rise of Silicon Valley in California as a cooking pot of digital innovation might not be surprised to see another innovative United States locale emerge: this time for the prevention, detection and response to agricultural and public health emergencies.

The new National Bio and Agro-defense Facility (NBAF) is expected, once fully operational by 2022, to be one of America’s foremost disease research facilities. The facility is being constructed by the US Department of Homeland Security and will be co-located with Kansas State University’s Biosecurity Research Institute (BRI). This institution seeks innovation by combining food safety researchers, plant pathologists, entomologists, and researchers examining the molecular biology of high-consequence animal, human, and plant pathogens.

These evolving US developments are supported by the recently released 2018 National Biodefense Strategy which consolidates a coordinated effort to define the paths to effectively counter threats from natural, accidental and deliberate biological events.

Private sector engagement in the US has also been prominent in the lead up to the National Strategy. A bipartisan privately sponsored group – the ‘Blue Ribbon Panel on Biodefense’ – has been active over a number of years. In October 2018, its efforts culminated in the publication of ‘A National Blueprint for Biodefense’.

The US is not alone in publishing strategies and guidance notes this year. The UK published its Biological Security Strategy in July, aligned with its most recent national security strategy and risk assessment.

Of course, several variables need to be active to trigger a disease process in human, animals and plants – other than a deliberate introduction of disease (see Figure 1). (Click to see chart) 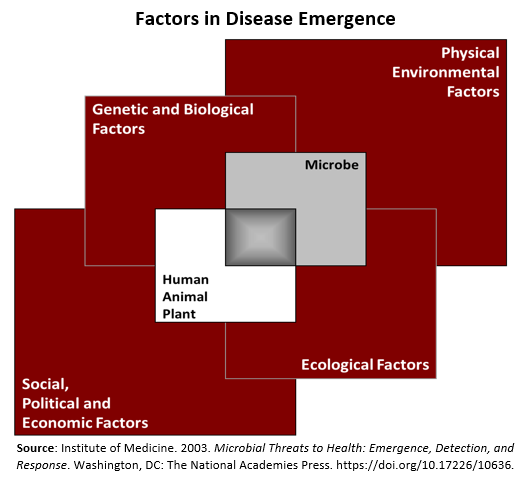 The likelihood of an infection leading to significant disease can be influenced by the physical environment of both host and infective agent. Human susceptibility to infection is more likely when normal defence mechanisms or immunity are impaired. Factors include genetically inherited traits and social and political conditions that give rise to vulnerability (such as long-term malnutrition). The adaptation of an infective agent to changing physical and environmental conditions are also significant factors, especially if a disease is spread by insects.

In light of these US and UK strategies, one may ask: what is Australia doing to enhance biological and agricultural security? The answer is quite a lot!

While Australia has over many years sustained effective capabilities across a range of scientific, technical and policy areas with respect to biosecurity, the country is not resting on its laurels. A series of step changes are evident in policy thinking.

In 2012, the Federal Department of Agriculture, Fisheries and Forestry published ‘Reform of Australia’s biosecurity system’. In 2015, this was followed by a discussion paper on the topic by Australia’s National Biosecurity Committee.

Then came a draft report by an independent committee established to update the Intergovernmental Agreement on Biosecurity (IGAB) in late 2016, with a final report released in 2017.

Several selected recommendations from the final report indicate directional changes of importance – many of which echo recent developments in the US and the UK.

These developments suggest that Australian policymakers have made a sophisticated analysis of the range of threats the country faces, with considered processes of public and private sector collaboration showing great potential for enhanced national outcomes.

While not constituting a root and branch change on how Australia will deliver biosecurity outcomes, the full suite of recommendations considered are timely and significant.

Australia, like the US and the UK, is seeking to enable a convergence of innovation, science and national security outcomes.

The opportunity and benefits of enhanced collaboration between the animal, plant and human health sectors and Australia’s national security institutions is not only logical, but also suggests a coherence of policy, planning and practice.

What is likely happening here is a biological security analogue to the much-vaunted Revolution in Military Affairs (RMA) of some years ago.

Australia was an early adherent to the ideas of the RMA. The country has seen a drive to adapt military thinking in response to changing geopolitical contexts, and has sought to harness a range of enabling capabilities such as the systemic use of information (an early instance of the value of ‘big data’) and other asymmetric defence practices.

These local biosecurity developments could be a Revolution in Bio-agricultural Affairs (RBAA).

Australia must not become stuck in the middle of this transformation or falter through lack of nerve or conviction. An obvious goal for Australian governments is the continued support for the coordination of national, regional and local institutions dedicated to maintaining food, animal, and plant security with strong links to human health. It is in the national interest to push through with the planned governance arrangements with the inclusiveness of new analytical lenses and operational considerations.

Australia needs to go beyond just a ‘knowledge edge’ to incorporate relevant systemic causal factors, like those in Figure 1. What the country needs is a comprehensive national framework of aligned strategy, policy and practice.

It is good to see then that on 4 October, Australia appointed its first Chief Environmental Biosecurity Officer – as referenced in the 2017 independent review of needs. The remit of the role will include oversight of planning for biosecurity preparedness, surveillance and response capacity requiring a collaborative effort in the identification and prioritisation of threats.

A further aspect of the role is to publicly report on the effectiveness of Australia’s biosecurity arrangements and ensure that exposures are better defined and prioritised. This will require strong links to the state-based biosecurity agencies as well as institutions responsible for human health and national security. This is good policy and planning translated into action.