Is the Australian economy too simple?

Why economic complexity can help Australia prepare for technological upheaval

There’s no global social safety net for the country that puts all its economic eggs in the wrong basket, Andrew Leigh writes.

Harvard’s David Moss once called government the ‘ultimate risk manager’. We have a social safety net to guard against the risk of poverty, a public healthcare system to deal with the risk of illness, and a public education system to remove the risk that a poor family might not be able to afford to educate their child.

You can think of your taxes partly as an insurance premium, with progressive taxation reflecting the fact that those of us who earn above-average incomes tend to have been fortunate in our family background, educational opportunities and career breaks. The notion of government as risk manager doesn’t cover the full gamut of what governments do, but it does encapsulate many of their important roles.

Looking ahead, the one thing we know about the challenges of the future is that they will not be those of today. That’s why we advise young people to acquire broad-based skills – writing beautifully, crunching numbers, motivating teams – because those attributes will continue to be of value even in the face of changes to the labour market.

In this sense, we encourage young people to diversify across possible jobs. If you want to be a mechanic, don’t become so specialised in fixing petrol-powered driven cars that you can’t adapt as the world changes to electric driverless cars. If you’re a speech therapist, make sure you’re adept at working with new technologies that are providing real-time feedback to patients. And so on.

Nations also need to be adaptable. The economic principle of comparative advantage tells us that the world can become richer when countries specialise at what they do best, and engage in global trade. But while some specialisation is good, too much can create excess risk.

If your national prosperity strategy relies on exporting sugar, you’re going to be at risk when diet soft drinks take over. Just like a worker who only has a single skillset, a country that makes just a few products takes on a lot of risk in the world economy. And while we have a welfare system to protect the worker, there’s no global social safety net for a country that puts all its eggs in the wrong basket.

Perhaps the most useful way of thinking about a country’s degree of specialisation is the Atlas of Economic Complexity.

Developed a decade ago by a team at Harvard’s Center for International Development, the atlas begins with the idea that some products are more complex than others. To make medical imaging devices or jet engines takes plenty of knowledge and extensive networks of people. To make wood logs or coffee beans requires less knowledge and smaller networks.

Lead author Ricardo Hausmann and his team liken the problem to Scrabble. A player with just a few letters can only make a few words. Having a broader mix of letters opens the possibility of making more words. Countries that are more complex are like scrabble players who can make more words.

As a proxy for the complexity of an economy, the experts use the products that a nation exports. Products like medical imaging devices are considered complex since few other countries export them, and those who do tend to export a wide range of other products. By contrast, products like diamonds are not considered especially complex, since diamond exporting countries tend to just export diamonds.

From the diversity of a country’s products, it is then possible to work back and calculate a proxy for the diversity of its economy. The world’s most complex economies are Japan, Switzerland and Germany. Here is a visualisation of Japan’s exports. (Click to see chart) 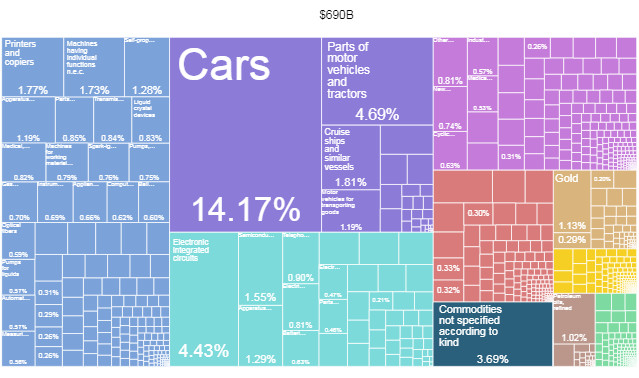 The three least complex economies are Cameroon, Guinea and Nigeria. This is what Nigeria’s exports look like. (Click to see chart) 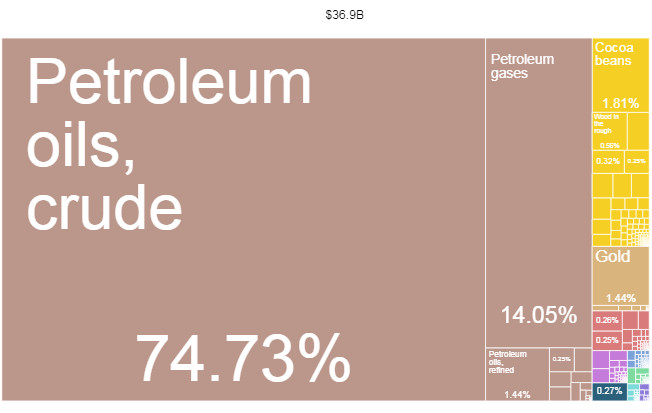 As you might expect, economic complexity correlates pretty highly with a country’s income level – in fact, it explains about four-fifths of the variation across nations. But complexity also turns out to be a good predictor of future economic growth, even given a country’s level of development.

Take two countries with similar levels of income, and the growth prospects of the more complex country are better than those for the less complex nation. Complexity does a better job at forecasting a nation’s economic future than many other measures, such as a country’s average education levels, governance levels or the World Economic Forum’s competitiveness index.

How does Australia fare on the Economic Complexity Index? In a word, badly. Out of 122 economies that the experts have assessed, we come 65th, just below halfway. For a nation that consistently ranks among the top 20 for our income per person, this is an astonishingly poor performance.

This is how the Atlas of Economic Complexity sees Australia’s exports. (Click to see chart) 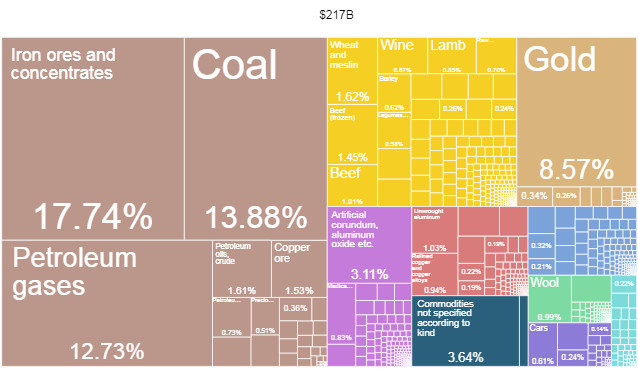 It isn’t just that we export relatively few products; it’s that those we export tend to be exported by pretty undiversified countries.

An easy response would be to say that Australia’s lack of complexity is a response to the mining boom. It is certainly true that the boom focused our mind on the fact that the commodities used to build Chinese skyscrapers were fetching stratospheric prices. Here is the trend in our export mix over the past few decades. (Click to see chart)

But it turns out that even before the boom, our exports weren’t particularly complex. The following chart shows our exports in 2000. (Click to see chart) 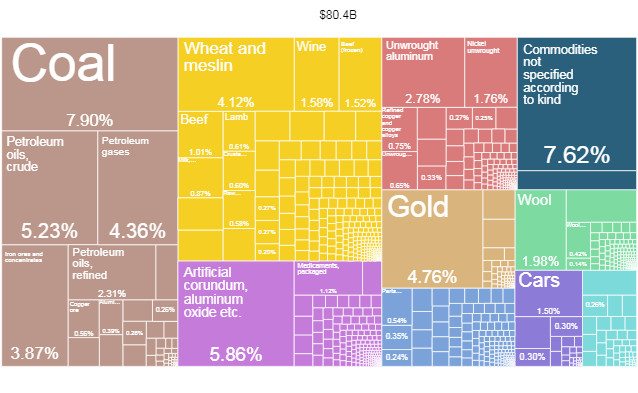 Over the longer run, Hausmann and his colleagues estimate that Australia’s economic complexity ranking stayed pretty constant from the mid-1960s to the late-1970s, then fell markedly over the past generation. On their measures, we have never been an especially complex economy. But we’ve gotten a lot ‘simpler’ in recent years.

There are certainly limitations to the methodology that the Atlas of Complexity uses. Services exports are excluded, which means that higher education, tourism, financial services and legal services exports don’t get counted.

But when the Harvard team looked at the best data for services exports they could find, they observed a strong correlation between a country’s economic complexity index, calculated only for goods, and that same nation’s economic complexity index, calculated based on goods and services. As the chart below shows, the relationship across nations is tight, and while Australia ranks a little higher when services are included, we still sit below most advanced nations. (Click to see chart) 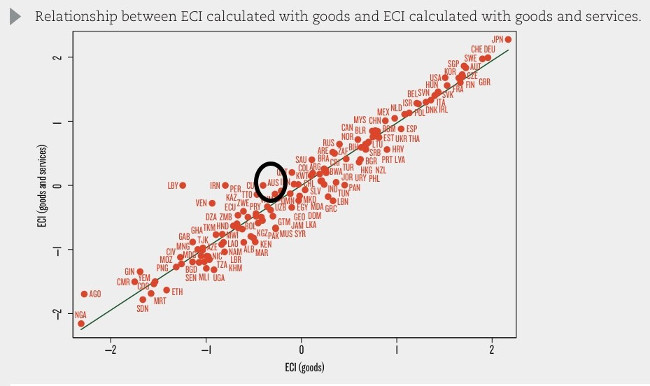 Another limitation of the economic complexity index is that it looks only at trade. But while a nation could, in theory, have a complex and diversified domestic market yet only sell simple products to the rest of the world, this seems unlikely in practice.

Ultimately, just as the proof of the pudding is in the eating, the proof of any growth theory is how it predicts growth. And anyone who wants to airily dismiss the Atlas of Complexity needs to explain the fact that it has a pretty good track record of forecasting past economic growth across nations.

A changing climate for business

More broadly, the suggestion that Australia’s economy might be a bit too simple for its own good accords with a concern that I’ve expressed about the past two-and-a-third centuries of economic growth, in the period following European settlement. When I look at the Australian economy over that period, I see a country that picked six pieces of ‘low-hanging fruit’.

In the early-1800s, it was the vast tracts of land taken from Indigenous inhabitants. In the mid-1800s, the Gold Rush. In the first half of the twentieth century came abundant inventions (cars, airplanes, telephones, radios, fridges, washing machines, typewriters). After the war, the low-hanging fruit came in the form of a migration boom. In the 1970s and 1980s, the expansion of mass education spurred growth. And in the 2000s, Australia benefited from the mining boom. Economically, we’ve been the lucky country.

So when we look at future sources of growth, we have two options: we can either hope for another piece of low-hanging fruit, or we can seek to make our own luck. My side of politics believes we should do the latter. That’s why my party’s whole economic team are committed to developing a more complex Australian economy.

To foster greater complexity, we need to boost education standards in Australia. This is why we are committed to investing in schools, to creating more apprenticeship places, and to putting the demand-driven system back in place in our university sector. It’s hard to imagine that we can be the clever country by cutting billions out of our education sector.

More than half of our industries are dominated by a handful of players. In department stores, newspapers, banking, health insurance, supermarkets, domestic airlines, internet service providers, baby food, and beer, the biggest four firms control more than 80 per cent of the market.

Supporting innovation in an age of disruption

As a nation, we have a plethora of mergers and a paucity of start-ups. We need to encourage more new business formation, and an environment in which entrepreneurs start enterprises not with the aspiration of being bought out by the oligopolists, but of taking a share of the market. Competition law in the app age isn’t easy, but it’s fundamental for our economic future that we get this right.

Our research and development sector needs more government focus, and more sustained investment. Basic science helped underpin innovations from wi-fi to the Gardisil vaccine that prevents cervical cancer. Yet cuts to the CSIRO, to innovation programs, and to university budgets reduce the chances that Australia can develop whole new industries that will create jobs, spur growth, and help develop a more complex economy.

On the trade front, we need to encourage a wider variety of export industries. Labor believes new trade agreements should be scrutinised by the Productivity Commission, to ensure that the benefits outweigh the costs. It’s an idea that should be supported by anyone who agrees that trade deals should be about economic results, not ministerial photo opportunities.

Finally, a more complex economy needs great infrastructure. That means more investment in roads, rail, and the infrastructure to support transport of the future, including driverless cars. It also means better broadband. The rollout of a second-rate National Broadband Network has come at a cost to Australia’s economic potential. It’s hard to develop the industries of the future when you’re constantly buffering.

Investing in infrastructure isn’t just a long-term play; it’s also one of the best things the federal government can do to create jobs. At 5.5 per cent, our unemployment rate is 1-2 percentage points higher than in many other advanced countries.

For the economy as a whole, it’s vital not just to think about how to lift up the best performers, but also how to improve the quality of the economic ecosystem. The complexity approach isn’t perfect, but it is a reminder that we have a lot of our national eggs in just a few baskets. Or, if you prefer the more literary metaphor – we have too few Scrabble letters.

There’s much to be proud of in Australia’s economic story, but we shouldn’t limit our ambitions to what has been done in the past. The waves of technological change to come could conceivably dwarf those we’ve seen in the past. Geopolitical rebalancing will doubtless affect our economy in ways we can’t imagine today.

Nations don’t buy insurance policies, but they can achieve the same outcomes in creative ways – by investing in a stronger education system, by ensuring we have a competitive economy and by improving our infrastructure.

Andrew Leigh is the Shadow Assistant Treasurer. This is an edited extract of a speech delivered to the Insurance Council of Australia.