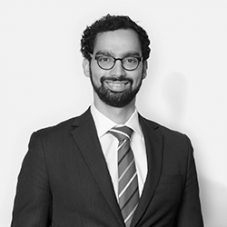 Arjuna Dibley has a Bachelor of Asian and Pacific Studies, and a Bachelor of Laws, both with Honours from the ANU. He currently works as a solicitor at Baker & McKenzie with a specialisation in International Climate Change Law, a topic on which he has published in academic journals and guest lectured at the law faculties of The University of Melbourne and The University of Sydney.

He is an Advisory Board member of the Australia Indonesia Youth Association (an organisation which he co-founded), a Fellow of the Asialink Leaders Program and an Asia Literacy Ambassador of the Asia Education Foundation. Arjuna is the recipient of numerous awards including the Prime Minister’s Australia Asia Endeavour Award and the Australian Davos Connection Australian Leadership Award. He has been recognized by the Lowy Institute for International Policy as a “new voice” in Australian foreign policy and contributes to these issues in policy blogs as well as the popular press.

Arjuna is a 2016 John Monash Scholar and plans to undertake a Masters of Law focusing on climate change law and policy in Indonesia, and examining innovative ways that such laws could be more effective