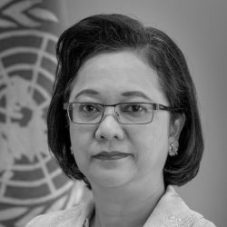 Armida Salsiah Alisjahbana is United Nations Under-Secretary-General and Executive Secretary of the United Nations Economic and Social Commission for Asia and the Pacific (UNESCAP).

From 2009 to 2014, she was Minister of National Development Planning and the Head of the National Development Planning Agency, Indonesia. She served as Co-chair of the Global Partnership for Effective Development Cooperation from 2012 to 2014. From 2009 to 2014, she was Alternate Governor of the World Bank and Alternate Governor of the Asian Development Bank representing the government of Indonesia. In 2016, she was a member of the High Level Independent Team of Advisors to support the ECOSOC Dialogue on the longer term positioning of the United Nations Development System in the context of the 2030 Agenda on Sustainable Development.