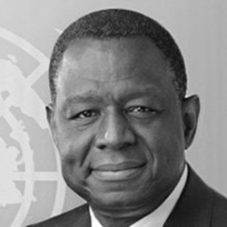 Dr Osotimehin is a global leader with expertise in public health, women’s empowerment and young people. He has a particular focus on promoting human rights, including sexual and reproductive health and rights, as well as population and development.

Dr Osotimehin has introduced reforms that have increased the effectiveness and efficiency of UNFPA and outlined a more robust vision for improving the lives of women, adolescents and youth around the world. His leadership and advocacy with governments and other key stakeholders will continue to focus on youth and voluntary family planning. He is also steering UNFPA’s humanitarian action and efforts around eliminating gender-based violence and other harmful practices.

He has previously served as Nigeria’s Minister for Health, and also as the Director General of the Nigerian National Agency for the Control of HIV and AIDS. Dr Osotimehin currently serves on various advisory boards and committees, including the Family Planning 2020 Reference Group and the World Economic Forum’s Global Agenda Council on Population Dynamics.

Dr Osotimehin completed his medical studies at the University of Ibadan, Nigeria, in 1972 and received a doctorate in medicine from the University of Birmingham in the United Kingdom in 1979. He was appointed professor at the University of Ibadan in 1980 and headed the Department of Clinical Pathology before being elected Provost of the College of Medicine in 1990. He has served as chair and member of several academic and health organisations, including as Chair of the National Action Committee on AIDS, between 2002 and 2007. Dr Osotimehin received the Nigerian national honour of Officer of the Order of the Niger, in December 2005.