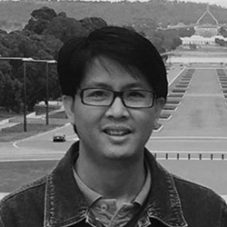 Buavanh Vilavong is a PhD candidate at Crawford School of Public Policy, the Australian National University. He thesis will examine the integration of Laos into the international economy, focusing on the role of production networks, technological upgrade and small and medium enterprises.

Buavanh is an economist, who has worked in the Ministry of Industry and Commerce, and the National Chamber of Commerce and Industry of Laos since 2000. He has operational experience in handing trade negotiation and internal reforms to support the accession of Laos to the World Trade Organization.

He had involved in various projects funded by donors, including the AusAID/DFAT, to support the integration of Laos into the regional and international economy. His professional career included 12 years as an experienced trade negotiator, before being promoted to be deputy director generals of the Department of Foreign Trade Policy and recently of the Department of Import and Export.

Buavanh holds master and bachelor degrees in economics (honours) from the University of Melbourne and Chulalongkorn University respectively. He writes some articles including on “After Joining the WTO, What’s Next for Laos”, “The Two Faces of ASEAN in Global Production Networks”, and “Business Support Crucial for Laos to Join the AEC and Lock in Growth”.

He authored, individually or as co-authors and contributing authors, in many publications in Managing the Challenges of WTO Participation (2005), Rules of Origin in Services Regional Trade Agreements: The Practices in Laos (2006), Addressing the Impacts of the Phasing out of Textiles and Clothing Quotas in Laos (2007), Updated Diagnostic Trade Integration Study of Laos (2012), and WTO Accessions and Trade Multilateralism: Case Studies and Lessons from the WTO at Twenty (2015).