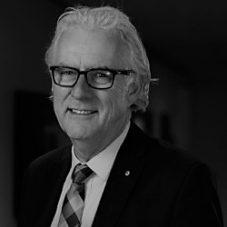 Christopher Findlay AM is an Honorary Professor at Crawford School of Public Policya and Executive Dean of Faculty of the Professions at University of Adelaide.

He is also a Member of the Academy of the Social Sciences in Australia.

Christopher for many years taught economics at all levels, with a focus on microeconomics and international economics, and was an author of a leading first year textbook for its first seven editions. Findlay’s research interests include Australia’s economic relationships with Asia, especially in the services sector.