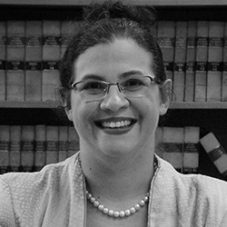 Dominique Dalla-Pozza is a Senior Lecturer at the ANU College of Law working in the field of Australian public law. Her primary research deals with the Australian Parliament and the legislative process, especially the process by which Australian national security law is made. She is particularly interested in the work done by parliamentary committees. In her role as a co-convenor of the ACT chapter of the Electoral Regulation Research Network (ERRN) Dom has also worked on the Senate voting system.

Dominique’s other field of interest is in national security law – her PhD focused on the process by which the Australian Parliament enacted counter-terrorism between 2001 and 2006.

In 2015 she presented work on the way in which the Australian Parliament made counter-terrorism law in the post-Howard era at a workshop on Deliberative Constitutionalism at the Faculty of Laws, University College London.

A distinctive feature of the approach Dom takes to legislative process is her use of ideas drawn from deliberative democratic theory as a core theme in her work. One of her main aims as a researcher is to continue to bring together ideas from the disciplines of political science and law to provide a richer understanding of the law-making process.