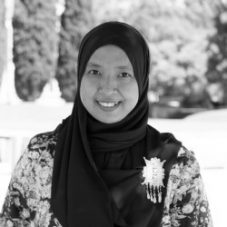 Ella Syafputri Prihatini is a Lecturer in International Relations at Bina Nusantara University in Indonesia and an honorary research fellow at the Centre for Muslim States and Societies at the University of Western Australia.

Ella has published her works in Politics & Gender, Parliamentary Affairs, and Contemporary Politics. In September 2019, she was listed by The Australian newspaper as one of Australia’s top 40 researchers who are less than 10 years into their careers.