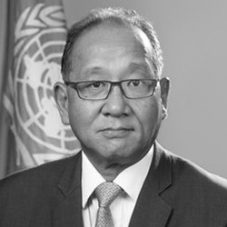 Mr Hongjoo Hahm (Republic of Korea) is the Officer-in-Charge of the United Nations Economic and Social Commission for Asia and the Pacific (ESCAP). He currently serves as the Deputy Executive Secretary of ESCAP for Programmes, Economics and Financing.

Formerly, Mr Hahm was the Senior Advisor to the Water Global Practice Group at the World Bank, where he also served as Country Manager for the Balkans, Head of the Infrastructure Unit in Jakarta (transport, energy, urban, and water and sanitation sectors), and Program Manager for the post-tsunami reconstruction of Aceh, post-earthquake Yogyakarta, and flood mitigation in Jakarta.

Mr Hahm holds a PhD from New York University, an Executive MBA from Harvard Business School, and a Diploma from the Cambridge University Programme for Sustainable Development. He graduated from Cairo American College, received his B.A. from the College of William and Mary, and M.Phil from the London School of Economics.

Mr Hahm graduated from Korea’s Third Military Academy and was commissioned as an officer in the Korean Army.