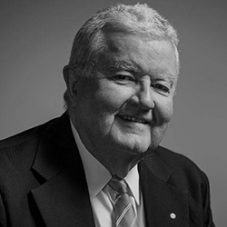 Professor Ian Chubb has been a strong and effective advocate for government and industry support of innovation and research in science, technology, engineering and mathematics (STEM) over several decades.

Throughout his career, including as Vice-Chancellor of the Australian National University (2001 to 2011) and as Chief Scientist of Australia (2011 to 2016), he made significant contributions to improving the infrastructure for scientific research and training and was conspicuous in raising the public profile of science in the media.

He was the ACT Australian of the Year in 2011 and has received six honorary doctorates. In 2016 he was awarded the Australian Academy of Science Medal for his outstanding contributions by sustained efforts in the public domain which have significantly advanced the cause of science and technology in Australia.