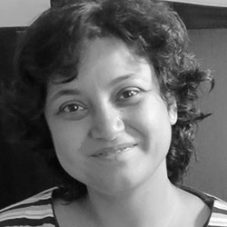 Dr Indrani Talukdar is a Research Fellow at the Indian Council of World Affairs, New Delhi. She is working on a book project titled ‘Russia in the 21st Century: A Study of Its Foreign Policy (2000-2015’. She obtained her Doctoral degree from Jawaharlal Nehru University, New Delhi under the title ‘Turkey and the Cyprus Conflict: Role of the European Union’. The thesis has been published in a book form by LAP LAMBERT Academic Publishing (ISBN 978-3-659-21097-6). Another book has been published titled ‘India and Russia: Deepening the Strategic Partnership’ by Shipra Publishers, New Delhi.

She has published articles and chapters on various issues related to international relations. She has appeared in TV interviews such on ‘Putin’s Visit to India’ to RT (Russian International TV) and in National TV interview ‘Lok Sabha’ regarding Russia’s and Turkey’s role in the Syrian crisis. Her commentaries appear in the Air India Radio (External Affairs section). She has presented papers in international and national forums.

She worked in Center for Air Power Studies, New Delhi as a Research Associate. Her areas of interest are International Relations, Security Studies, Conflict Resolution, and Peace Studies along with area studies specialised on Turkey, Russia, Cyprus, and the European Union.