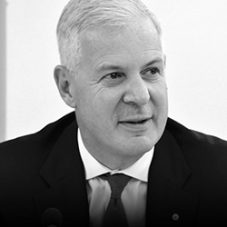 John W.H. Denton AO is Chairman of Corrs’ International Advisory Council and was formerly Partner and Chief Executive Officer of Corrs. John is the Secretary-General of the International Chamber of Commerce. His appointment to this role marked the first time an Australian has held this position.

A former diplomat, John was a Panel Member of the Independent Review of Aid Effectiveness and was the founding Chairman of the United Nations High Commission for Refugees Australia for more than a decade.

John has a Bachelor of Arts (Honours) and a Bachelor of Law from the University of Melbourne and is a Harvard Business School Alumnus.

In 2015, John was appointed as an Officer of the Order of Australia (AO) for his work in business and commerce, the arts and social welfare, and with refugees.