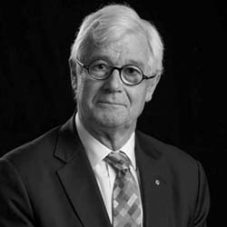 Julian Burnside is an Australian barrister who practices principally in commercial litigation, trade practises, and administrative law. He is also a human rights and refugee advocate, and author. Julian stood as a candidate for the Greens in his local electorate of Kooyong in the 2019 federal election.

While maintaining a strong commercial practice, Julian has also developed a distinguished public law practice. He regularly appears in both first instance and appellate proceedings in the Supreme Court and the Federal Court in Victoria and in other states. He also appears in the High Court of Australia.

Julian’s landmark cases include successfully appearing for the Plaintiff in Trevorrow v. South Australia which was the first case in which a court recognised membership of the ‘Stolen Generation’ as a basis for legal compensation. He also successfully appeared before the Federal Court and in the High Court for the Maritime Union of Australia in the Patrick Stevedores v MUA litigation, otherwise known as the ‘Waterfront Dispute’.

In recent years Julian has become one of Australia’s leading advocates in relation to Australia’s treatment of asylum seekers and the protection of human rights and is also an accomplished author.

In 2009 Julian was awarded an Officer of the Order of Australia for his work as a human rights advocate, and for his services to the arts and the law.