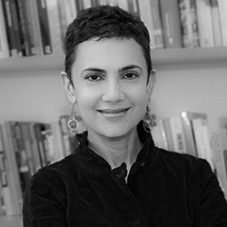 Jyoti Puri is an interdisciplinary scholar who writes and teaches at the crossroads of sociology, sexuality and queer studies, and postcolonial feminist theory. Her book, Woman, Body, Desire in Post-colonial India (Routledge 1999), addresses how constructs of gender and sexuality are shaped across national and transnational contexts. Encountering Nationalism, (Blackwell Publishers 2004), is a feminist sociological exploration of nationalism and the state.

Her recent book, Sexual States: Governance and the Struggle against the Anti-Sodomy Law in India (Duke University Press 2016), focuses on the efforts to decriminalise homosexuality, while offering a critical appraisal of state governance. It received the Distinguished Book award from the Sexualities Section of the American Sociological Association.

She has also published numerous articles and book chapters in journals and edited volumes on sexuality and gender. Additional publications include a co-edited special issue on gender, sexuality, state, and nation for Gender & Society (April 2005) and another one on sexuality and the state for Rethinking Marxism (October 2012).