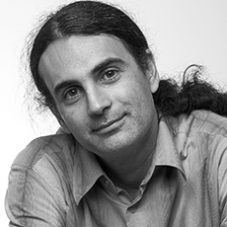 Kim Cunio is an Associate Professor studying composition and musicology in the School of Music of The Australian National University. He is an accomplished researching composer and performer and was awarded an ABC Golden Manuscript Award in recognition of his work with traditional music.

Dr Cunio has studied with a number of Australia’s finest musicians including Australian composer Nigel Butterly, conductor and producer Eric Clapham, and Jazz guitar legend Ike Isaacs. He is an accomplished researching composer and performer and was awarded an ABC Golden Manuscript Award in recognition of his work with traditional music. Dr Cunio can write in many mediums, from full scoring for opera or music theatre, orchestra, traditional ensembles, or in modern contexts using sound design and samples. He has also provided music for many installations and outdoor events, including working to picture and live visuals with large ensembles and choirs. Many of his commissions have a serious research component, where he combines anthropological work with transcription. Dr Cunio takes the position of being a participant observer in such work; and is part of an international push to preserve the dying art of Eastern Jewish (mizrachi) music.

Dr Cunio’s music has been played around the world, including performances at the White House, United Nations NGO’s, and festivals in a number of countries, and his list of commissioning organisations is significant, including: the Olympics, The Art Gallery of NSW, The National Gallery of Victoria, The Melbourne International Arts Festival, The Foundation for Universal Sacred Music (USA), and many others. A number of his projects have been funded by the Australia Council for the Arts, and his touring has been funded by the Commonwealth Government. Dr Cunio is published by the ABC, records with New World Music and lectures in composition.