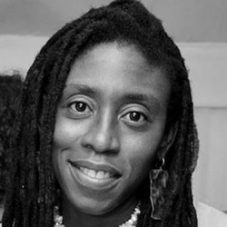 Kim-Marie Spence is a PhD Candidate at Crawford School of Public Policy at the Australian National University. Her research focuses on creative economy development policy in the Global South, with a comparative study of Bollywood, Hallyu and Reggae. She is a Jamaican Australia Awards Scholar.

Kim-Marie is a former Jamaica Film Commissioner and previous head of the Creative Industries for Jamaica’s trade and investment agency, JAMPRO, inclusive of film, fashion, the visual arts and music. She focused on promoting the local creative industry, particularly animation and television series, as ways to utilise Jamaica’s brand for economic growth and national brand positioning.

Her interest in the creative economy is beyond the academic. She sits on the board of advisors for Jamaican visual arts outfit, NLA. She has been involved in fashion weeks in Jamaica, Australia and beyond; and is a keen follower of reggae and dancehall.

Kim-Marie’s interest in public policy and development is a longstanding one, having studied development studies at Oxford as a Jamaica Rhodes Scholar. She is also co-founder and previous Executive Director of the Caribbean first public policy think tank, the Caribbean Policy Research Institute (CaPRI). Kim-Marie previously sat on the President’s Advisory Council of the Inter-American Development Bank. She has worked in development both in her home country of Jamaica and internationally.

At the ANU, Kim-Marie is also currently the Vice-President of Postgraduate and Research Students Association (PARSA) and has previously served on Council of International Students Australia  (CISA’s) National Executive Council.