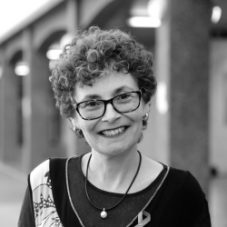 Kim Rubenstein is a Professor in the Faculty of Business, Government and Law and Co-Director of the 50/50 by 2030 Foundation at the University of Canberra.

A graduate of the University of Melbourne and Harvard University, she is Australia’s leading expert on citizenship, both around its formal legal status and in law’s intersection with broader normative notions of citizenship as membership and participation. This has led to her scholarship around gender and public law, which includes her legal work and her oral history work around women lawyers’ contributions in the public sphere.

She was the Director of the Centre for International and Public Law at the ANU from 2006-2015 and the Inaugural Convener of the ANU Gender Institute from 2011-2012. She is a Fellow of the Australian Academy of Law and the Australia Academy of Social Sciences.