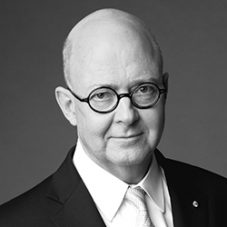 Kim Williams has had a long involvement in the arts, entertainment and media industries here and overseas and has held various executive leadership positions since the late 1970s including as Chief Executive at NewsCorp Australia, FOXTEL, Fox Studios Australia, the Australian Film Commission, Southern Star Entertainment and Musica Viva Australia and also as a senior executive at the ABC.

He was appointed as a Member in the Order of Australia in June 2006 for his services to the arts and public policy formulation in the film and television industries. In October 2009 he was awarded a Doctorate of Letters (Honoris Causa) by Macquarie University for his contribution to the arts and entertainment industry in Australia and internationally.

Mr Williams is currently applying his extensive professional experience in varied professional advisory and teaching assignments and as a director in diverse governance roles in commerce and the not for profit sector.