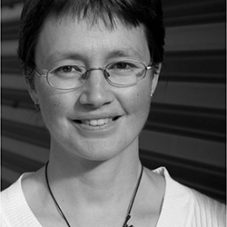 Kylie Catchpole is a Professor at the School of Engineering at the Australian National University. Her research interests are in nanotechnology and new materials for solar cell applications.  She has a physics degree from the ANU, winning a University Medal, and a PhD from the ANU. She was a Post-doctoral Fellow at the University of New South Wales and the FOM Institute for Atomic and Molecular Physics, Amsterdam. She has published over 100 papers, which have been cited over 6000 times to date.

Her work on plasmonic solar cells has been featured in the news sections of Science magazine and The Economist and in 2010 her work on nanophotonic light trapping was listed as one of MIT Technology Review’s ‘10 most important emerging technologies’.  In 2011 she was an episode winner on ABC TV’s ‘New Inventors’.  In 2015 she was awarded the John Booker medal in engineering science from the Australian Academy of Science.