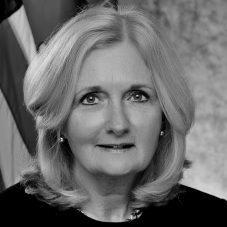 Madelyn Creedon is the 2018 Alliance 21 Fellow at the United States Studies Centre at the University of Sydney. She has had a long and distinguished career in US government service, most recently as Principal Deputy Administrator of the National Nuclear Security Administration (NNSA) within the Department of Energy, a position she held from 2014 to 2017.

She also served in the Pentagon as Assistant Secretary of Defense for Global Strategic Affairs from 2011 to 2014, overseeing policy development in the areas of missile defence, nuclear security, cybersecurity and space.

Madelyn served as counsel for the US Senate Committee on Armed Services for many years, beginning in 1990; assignments and focus areas included the Subcommittee on Strategic Forces as well as threat reduction and nuclear nonproliferation. During that time, she also served as Deputy Administrator for Defense Programs at the NNSA, Associate Deputy Secretary of Energy, and General Counsel for the Defense Base Closure and Realignment Commission.

She started her career as a trial attorney at the Department of Energy.

She holds a JD from St. Louis University School of Law, and a BA from the University of Evansville.