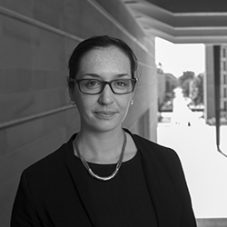 Dr Melissa Crouch is a Senior Lecturer at the Law Faculty, the University of New South Wales, Sydney. She is the author of Law and Religion in Indonesia: Conflict and the Courts in West Java (Routledge, 2014).

Melissa is the editor of three major volumes on Myanmar: Law, Society and Transition in Myanmar (2014); ‘Islam and the State in Myanmar: Muslim-Buddhist Relations and the Politics of Belonging‘ (OUP 2016), and The Business of Transition: Law, Development and Economics in Myanmar (CUP, forthcoming 2017).

Her research contributes to the field of Asian Legal Studies, with a concentration on Constitutional Change, Administrative Justice, Law and Development, and Law and Religion. Her research has a particular focus on Southeast Asia, where she has conducted extensive socio-legal field research. Melissa teaches in the areas of public law, comparative law and Asian Legal Studies, and she has contributed to numerous initiatives on constitutional and legal reform in Myanmar.