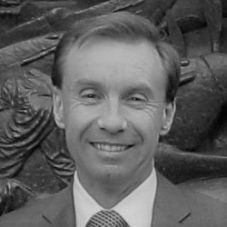 Mick Ryan is a retired Major General of the Australian Army, author of War Transformed: The Future of Twenty-First Century Great Power Competition and Conflict and former Commander of the Australian Defence College.

Mick has a Bachelor’s degree in Asian Studies from the University of New England and is a graduate of the Australian Defence Force School of Languages. He is a Distinguished Graduate of the United States Marine Corps Command and Staff College, and a graduate of its School of Advanced Warfighting. In 2012, he graduated with distinction from the Johns Hopkins University School of Advanced International Studies, earning a Master’s in International Public Policy.

From October 2014 until February 2016, Major General Ryan commanded the Darwin-based 1st Brigade, the Australian Army’s oldest and most operationally experienced combat formation. From February 2016 until October 2017, he led the education, training and doctrine efforts in Army as Director General Training and Doctrine. During this, he authored and implemented the Ryan Review, a fundamental and future-oriented strategic review of Army’s approach to education, training, doctrine and lessons learned.

He has deep experience the fields of strategy, interagency and joint operations, command and leadership as well as professional military education. He possesses a long-standing interest in national and military strategy, military history, as well as organisational innovation and adaptation.