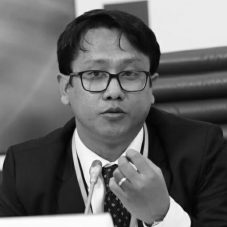 Monish Tourangbam is an Assistant Professor at the Department of Geopolitics and International Relations, Manipal Academy of Higher Education (MAHE), in Karnataka, India. He is also the Coordinator of the North East Studies Centre, Manipal University. Previously, he was Associate Fellow at the Centre for International Relations, Observer Research Foundation, New Delhi.

He has a PhD from the US Studies Division, Centre for Canadian, US and Latin American Studies, School of International Studies, Jawaharlal Nehru University (New Delhi). He has also worked on the US role in Afghanistan as a part of a Net Assessment Project between ORF and the Integrated Defence Staff (IDS) and was a participant at the Asia Foundation’s 2016 South Asia workshop on Asian Views of America’s Role in Asia.

He has a number of publications to his credit, including chapters in books, articles in journals like India Quarterly, Indian Foreign Affairs Journal and commentaries/opinion pieces in newspapers like the Tribune, The Pioneer and strategic affairs websites like Foreign Policy (South Asia), South Asia Democratic Forum (Germany) and South Asian Voices (Stimson Center).