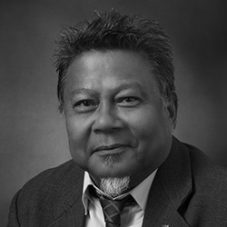 Peter Yu is a Yawuru Man from Broome in the Kimberley region in North West Australia with 40 years experience in Indigenous development and advocacy, and is inaugural Vice-President (First Nations) at The Australian National University.

He has been an advocate for the social, cultural and economic advancement and well-being of Kimberley and other Aboriginal communities for his entire career. Over this period he has been instrumental in the development of many community-based organisations and initiatives which have had an enduring influence on the Kimberley region in particular.

He was Executive Director of the Kimberley Land Council during the 1990s and had a national leadership role negotiating the Federal Government’s response to the 1992 Mabo High Court judgement on native title.

His former roles include Deputy Chair of the Indigenous Land Corporation, Chair of the WA Aboriginal Housing Board, a member of the Board of the WA Museum, the National Museum of Australia (NMA) Board where he led the 2015-16 British Museum and NMA exhibitions of Australian Indigenous cultural objects.

He is currently a Board Member of the North Australian Indigenous Land and Sea Management Alliance Ltd (NAILSMA Ltd), Deputy Chair of the AFL Aboriginal Advisory Committee, Deputy Chair of Broome Future Ltd and Trustee on the Princes Trust Australia.