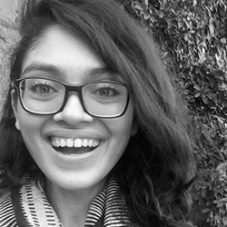 Radha Sarkar is a doctoral student at Yale University. She completed an MSc in Comparative Politics at the London School of Economics in 2016. Before that, she earned an undergraduate degree in politics from Princeton University.

Her research interests include political violence and the politics of religion and ethnicity and her co-authored work has appeared in Studies in Conflict and Terrorism; Politics, Religion & Ideology; and The Economic and Political Weekly.