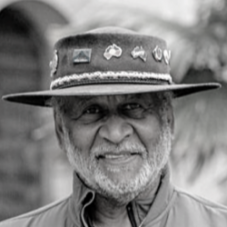 Ray works with a number of corporate clients and has been the founder and consultant on the development of programs and projects for the remaining men of Kinchela Boys Home and the survivors of the Bomaderry Aboriginal Children’s Home, the first designated home for Aboriginal babies of the Stolen Generations in New South Wales. In his role as pastor at St John’s he is developing a unique and ambitious Scarred Tree ministry in solidarity with St John’s members and its community.

At Murdoch University, Western Australia, Ray earned a Bachelors degree in Theology and helped establish the Aboriginal Education Unit where he worked as its co-ordinator. Ray has worked for World Vision Australia’s Indigenous programs for 12 years and was its National Director for six of those years.

In 2001, he spoke in Italy at a Global Forum on Ethics and Economics, where he also had a private audience with the Pope.

Ray is the father of three children and two grandchildren. He loves music, writing songs, sport, public speaking and travel.