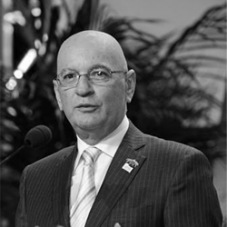 Roland Rich is Assistant Teaching Professor at Rutgers University. He received his BA and LLB from the University of Sydney and his MIntLaw and PhD from the Australian National University (ANU). He joined Rutgers in 2015 after seven years at the United Nations (UN) where he was Executive Head of the UN Democracy Fund and from 2010 to 2014 concurrently Director of the UN Office for Partnerships.

Prior to his appointment to the UN, Dr Rich was at the Australian Defence College. In 2005, he was a Research Fellow at the National Endowment for Democracy in Washington DC. Between 1998 and 2005, he was the Foundation Director of the Centre for Democratic Institutions at the ANU. He joined the Australian Foreign Service in 1975 and had postings in Paris, Rangoon and Manila and, from 1994 to 1997 he was Australian Ambassador to Laos. At headquarters, he also served as Legal Advisor and Assistant Secretary for International Organisations.

He has published The UN Role in Promoting Democracy (UNU Press, 2004), Pacific Asia in Quest of Democracy (Rienner, 2007), Parties and Parliaments in Southeast Asia – Non-Partisan Chambers in Indonesia, Thailand and the Philippines(Routledge, 2012), Democracy in Crisis – Why, Where, How to Respond (Rienner, 2017).