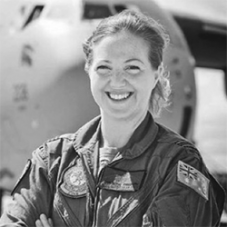 Squadron Leader Samantha Freebairn worked as an operational C-17A Globemaster pilot, flying combat and humanitarian relief missions. She wrote the policy which enabled her return to operational flying after having children and was employed as an Operations Flight Commander for 36 Squadron and their fleet of eight C-17A Globemaster aircraft. She now instructs in the C-17A simulator.

In 2014, Samantha won the QLD Telstra Business Women’s Award in Business Innovation for her Graduate Pilot Scheme, which incentivises military aviation to women who had never previously considered it. This successfully doubled women pilot numbers in the Air Force in 2 years, when they had remained stagnant for the prior 30 years.

Samantha has a Bachelor of Science degree and a Masters of Management in Leadership, is a certified Workplace and Business Coach and is a graduate of the Harvard University (John F. Kennedy School of Government)  ‘Global Leadership and Public Policy for the 21st Century’ program.

Samantha is married with two young children, and in 2016 was appointed by the World Economic Forum as a Young Global Leader in their list of most influential global leaders under 40 years of age.