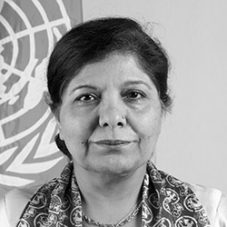 Shamshad Akhtar was appointed by the UN Secretary-General as United Nations Under-Secretary-General and Executive Secretary of the Economic and Social Commission for Asia and the Pacific in December 2013. She also serves as UN Sherpa for the G20.

Previously the Secretary-General’s Senior Advisor on Economics and Finance, as well as Assistant Secretary-General for Economic Development, she served as Governor of the Central Bank of Pakistan from 2006 to 2009; Vice President of the World Bank’s Middle East and North Africa Region; and held a range of senior posts in the Asian Development Bank, including that of Director-General (East Asia region).