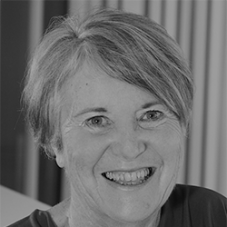 Professor Sharon Bell is Dean of the College of Asia and the Pacific at The Australian National University.

Professor Bell holds a PhD from the University of Sydney in anthropology. In addition to holding senior executive roles in Australian universities over the past decade, she has conducted research on gender equity and authored the influential report Women in Science in Australia: Maximising Productivity, Diversity and Innovation. With Professor Lyn Yates from the University of Melbourne, she has recently concluded another major project, Women in the Scientific Research Workforce: Identifying and Sustaining the Diversity Advantage.

Before taking on senior university leadership roles, she was a member of Film Australia’s Ethnographic Film Unit and Head of Studies at the Australian Film, Television and Radio School. In 1999, Sharon spent six months in Sri Lanka consulting on the reform of performing arts teacher education for the World Bank. Later that year she was invited to return to Sri Lanka to advise the University Grants Commission on tertiary arts education through a review of the Institute of Aesthetic Studies, Colombo. That work resulted in the Institute being granted independent status as The University of the Visual and Performing Arts in 2005.