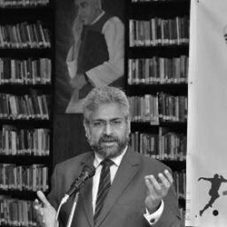 Siddharth Varadarajan is an Indian-American journalist, editor, and academic. He is the founding Editor of The Wire and the former Editor of The Hindu. He has reported on the NATO war against Yugoslavia, the destruction of the Bamyan Buddhas by the Taliban regime in Afghanistan, the war in Iraq, and the crisis in Kashmir. Siddharth has edited a book titled Gujarat: The Making of a Tragedy which is about the 2002 Gujarat riots.