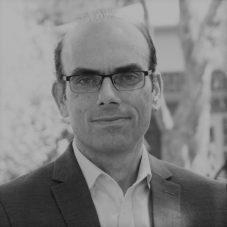 Sotiris Vardoulakis is inaugural Professor of Global Environmental Health at the ANU National Centre for Epidemiology and Population Health, which he joined in September 2019. Before this, he was Director of Research and Head of the World Health Organization Collaborating Centre on Occupational Health at the Institute of Occupational Medicine in Edinburgh.

Sotiris is founding Co-Chair of the International Consortium for Urban Environmental Health and Sustainability and Honorary Professor at the European Centre for Environment and Human Health at the University of Exeter Medical School. Previously he was Head of the Air Pollution Group and the Environmental Change Department at Public Health England, and held academic positions at the London School of Hygiene and Tropical Medicine and the University of Birmingham.

He was one of the lead authors of the first United Kingdom Climate Change Risk Assessment and contributor to the National Adaptation Programme. He served as a member of the National Institute for Health and Care Excellence Public Health Advisory Committee on Air Pollution and of the Royal College of Paediatricians and Childhood Health Group on Indoor Air Quality.

Over the last 20 years, he has advised national and local governments and international organisations, such as the World Health Organization, the European Parliament, the UK Government, the Chinese Centre for Disease Control and Prevention, and the Australian Department of Health, on the health effects of climate change and air pollution, and on environmental sustainability, health protection, and risk communication. Sotiris has been involved in numerous research projects, including field studies, environmental modelling, epidemiology, risk assessment and policy analysis in Europe, Africa, Asia, Australia and the Pacific.

His main research interests include climate change, air pollution and health, sustainable cities, exposure assessment, environmental epidemiology, and public health communication and policy. He is Specialty Chief Editor (Health and Cities) for Frontiers in Sustainable Cities, and Associate Editor for the International Journal of Environmental Research and Public Health. Sotiris frequently comments in the media and tweets.