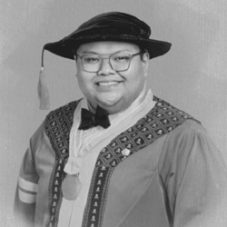 Taufik Rachmat Nugraha is Research Fellow at The Indonesian Centre for the Law of the Sea at Universitas Padjadjaran Law School in Bandung, Indonesia.

Taufik Rachmat earned a Master of Law degree in 2020 from Universitas Padjadjaran Faculty of Law with a thesis titled ‘Protection Against Alien Biohazard Contamination in the Mars Exploration Program: An International Space Law Approach.’

Taufik Rachmat Nugrah is also active in several international non-government organisations and research institutions. In 2018 Taufik was appointed as National Point of Contact for the Republic of Indonesia by the Space Generation Advisory Council, Vienna, Austria, and member of the International Academy of Space Law, Moscow, Russia.

Taufik is very keen on international space law, astropolitics and space security, the Law of the Sea, maritime security, and nuclear law. These interests are reflected in his academic works, which have been published in national and international journals.