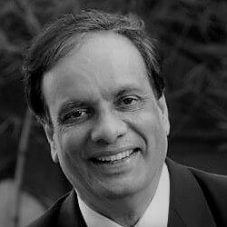 Vinod Thomas is a former senior vice president at the World Bank Institute, Director General of Independent Evaluation at Asian Development Bank, and is a Visiting Professor at the Lee Kuan Yew School of Public Policy at National University of Singapore.

He also held positions as Chief Economist for the World Bank in the combined Asia Region and the East Asia and Pacific Region. During this time, he led analytical work relating to the enormous success of the East Asian economies, as well as their threats in the areas of finance, social progress and environmental protection.

Vinod was the Director of the 1991 World Development Report, entitled The Challenge of Development, working with the then Chief economists Stanley Fischer and Larry Summers. The report assessed the world’s development experience. It signalled the role of market friendly reforms, trade reform, freedom and liberties, health, education, the environment, and summarised the desirable balance in governance—noting in the important role of the state to complement the role of markets.

He was also Chief of Trade Policy and Principal Economist for Colombia. As Chief in the Trade Policy Division, he established a new work program of research, policy analysis and operational support. He was Co-Director of a UNDP-financed technical assistance project for trade expansion and Co-Director of a Board Report on Adjustment Lending and a Board Paper on Trade Policy.

Vinod authored books, articles, and reports on macroeconomic, social and environmental issues, among them, Climate Change and Natural Disasters, Multilateral Banks and the Development Process, The Quality of Growth, and From Inside Brazil. His op-ed articles have been featured in national and international newspapers including The New York Times, The Philadelphia Inquirer, San Francisco Chronicle, Los Angeles Times, Philippine Daily Inquirer, China Daily, South China Morning Post, The Korea Herald, The Hindu, and The Guardian.