The struggle for an official identity

In Bangalore, there’s a cheery greeting– address illa! It literally translates to “no address”, but is a reference to not having known where someone was for a while. As I began my doctoral fieldwork in the city, a lot of people greeted me this way.

It became a metaphor for the work I was doing. My quest to understand politics among rural-urban migrants in Bangalore revealed something startling – entire communities in many parts of the city do not possess any form of identification because they lack an address, a city address being something migrants have great difficulty obtaining. For the poor, access to state utilities and program entitlements is contingent on having one.

In the decade since the 2001 census, the urban population in India has grown faster than the rural population, though urban fertility rates have remained lower. Urban growth has therefore arguably come from internal migrants, both rural and from smaller urban towns. While Bangalore’s migrants in the 1960s and 1970s came from large-scale government enterprises and the growth of small-scale industries, more recent numbers have been spurred by the growth of the Information Technology (IT) and IT enabled Services (ITeS) sectors, which in turn spurred a construction and real-estate boom. This industry relies significantly on cheap and plentiful migrant labour. 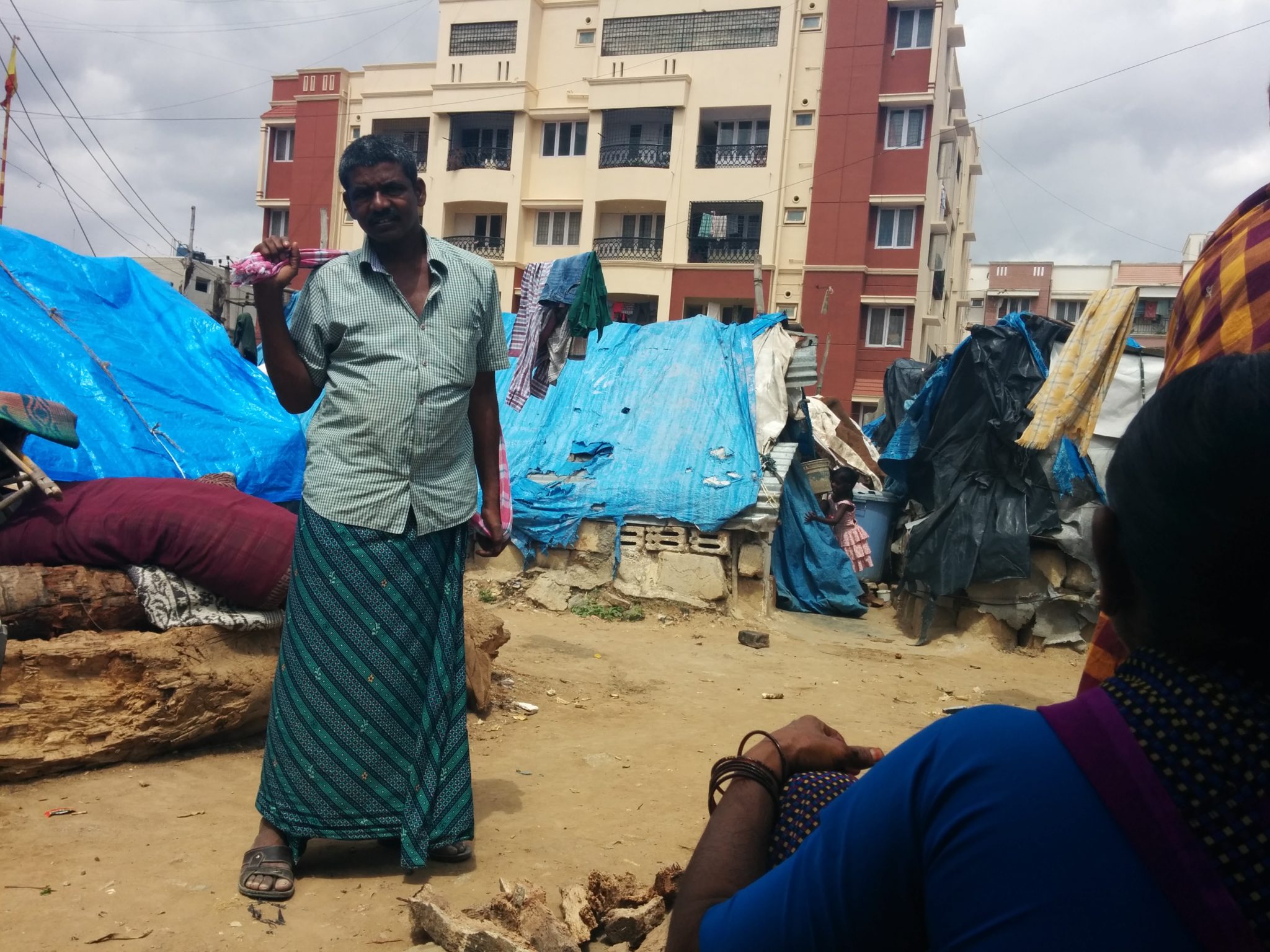 The most recent (2011) Census data on migration is not yet publicly available, but 2001 data reveals that Bangalore has the third highest number of migrants after Delhi and Mumbai. Some 45 per cent of these are from other states. Perhaps Bangalore’s proximity to two state borders (Andhra Pradesh and Karnataka) is an explanation.

Elites who migrate to work in the IT and ITeS sectors settle into plush apartment buildings. In stark contrast, poor migrants who come into Bangalore live in tenuous living arrangements with no security or documentation, in visibly poor conditions. Many are squatters on public land under litigation or ‘no-persons’ land, such as land near railway lines or dried-up lakebeds. Some are able to “rent” huts from private landowners, with no prospect of access to legitimate “address proof’’ documents, while others live on construction sites; there is increasing evidence of large construction companies having a captive workforce.

This shadowy existence implies that poor migrants are unable to produce any acceptable proof of their residence in the city.

Access to almost any form of identity documentation is predicated upon address proof. This includes, ironically, the Aadhar card, one of the proposed features of which is the emphasis of biometric markers at the expense of markers like address.

Having a proof of address is a pre-requisite for securing a range of identity documents which certify that the bearers and their households are entitled to specific public programs. For instance, the ration card represents access to the public distribution system. Access to programs for subsidised food, gas, and even applications for housing is predicated upon having identity cards, which, in turn, require “address proof”.

The most basic and direct consequence of migrants’ tenuous living arrangements is therefore the inability to receive certification for public programs. It is also hard to find formal or permanent employment if one lacks identification. 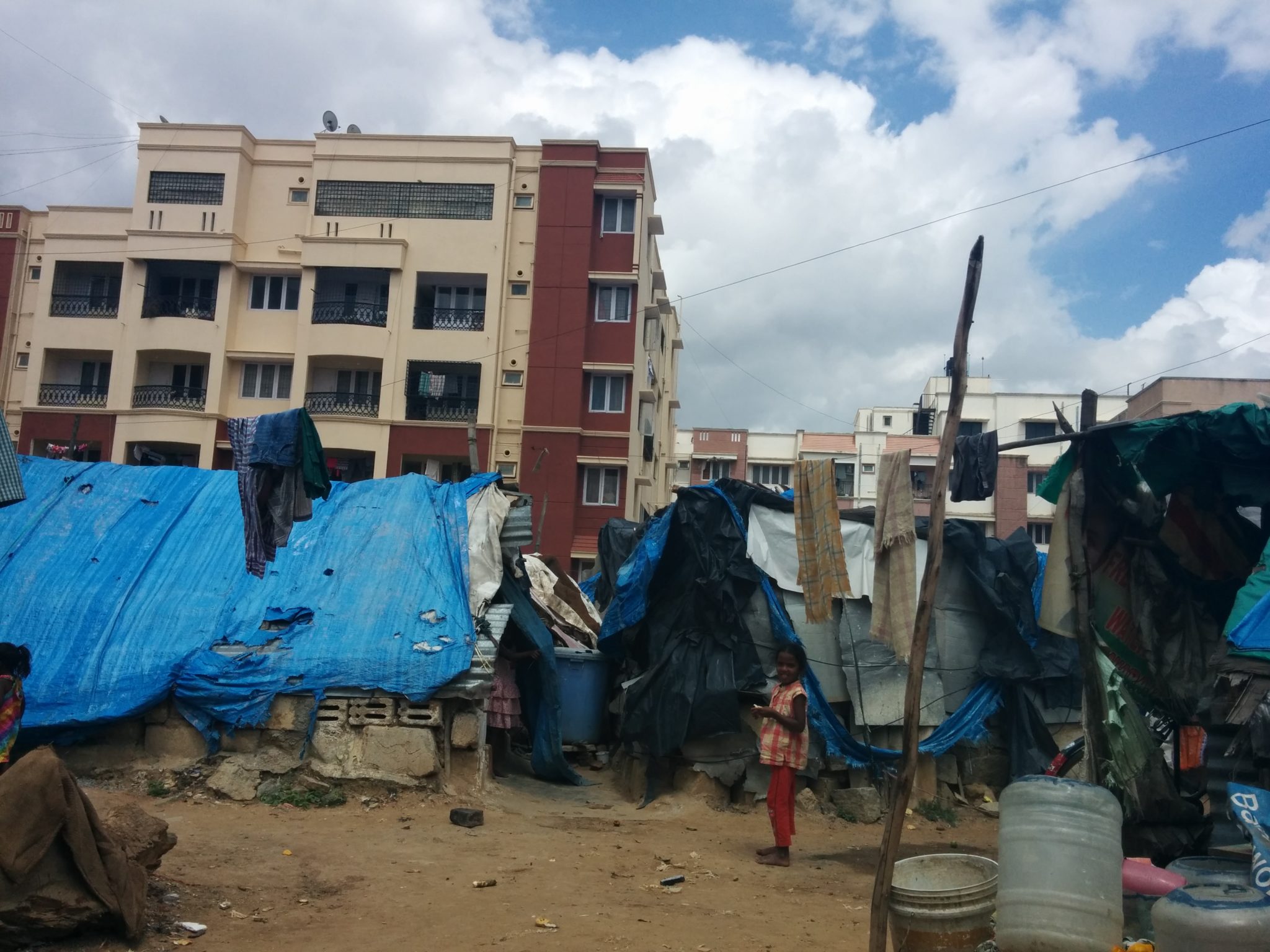 The lack of legitimacy does not just have consequences for individual migrant households. Even in long-term settlements, state agencies are unwilling to supply water or electricity as these provide security and become the basis of claims for regularization, which comes about when residents with access to essential services approach state authorities for the allotment of titles and regularization of their occupations. In the absence of these services, occupants are more easily moved. Consequently, entire communities lack access to vital public utilities like water and sanitation. In Bangalore, migrants end up paying INR 3-5 (AUD 5c-11c) for a two-litre pot of poor-quality water  – and they have to walk some distance to get it. Similarly, communities lack sanitation or access to waste disposal systems, compounding public health vulnerabilities.

Besides the economic and social exclusion that results from inhibited access to social protection and public goods, migrants also face political exclusion. Internal migrants are affected by the political choices they make (or not make) as they remain within India. Of course, like all state-authorised identification, the voter ID card also requires proof of address.

Though the rules relating to preparation of electoral rolls do provide a neat little exception – in the case of a “homeless person”, a Booth Level Officer can visit the place where the person sleeps to ascertain if that is the “address”. Although most voters and local leaders I interviewed do not seem to be aware of this provision. The consequence is the absence of a significant proportion of the voting age population from the electoral rolls in urban areas, in positions of power, and ultimately, in the decisions of elected bodies.

It all comes down to an address, and here’s the rub – the “good proofs” of address, perhaps those such as the Aadhar card, themselves require a “good proof” of address, such as registered rental agreements or sale deeds. So, in order to get a card that acts as a proof of address you need proof of address. If there is a Catch-22 set in Bangalore it could be titled Address illa.

For any benefits of the inevitable urbanisation to reach all Indians, public policy “wonks” and scholars have to wrap their heads around the direct issues of lack of access to programs and labour markets, as well as broader notions of social, economic and political exclusion that migrants face in cities. But first of all, it is necessary to ask what social programs mean if migrants have no identity.

Sarayu Natarajan is a doctoral candidate in Politics at the King’s India Institute, King’s College London.