And what to do about it

A revolutionary approach to action on landmines that includes humanitarian and development needs is the long-term answer Cambodia is looking for, Alpaslan Ozerdem writes.

The human cost of anti-personnel landmines and unexploded ordnance (UXO) is ever-present for many communities affected by armed conflict across the world. For populations in such challenging post-conflict environments, injuries and deaths due to exposure to Explosive Remnants of War (ERW) can often occur years after the mines were laid and long after when the conflict has officially ended.

Therefore, the dangers ERW pose to war-affected societies are not only through their indiscriminate killing and maiming but also what they mean for the long-term peacebuilding and development goals that those societies struggle to achieve.

Landmines and other ERW come with a very real human cost and are a global problem. According to the International Campaign to Ban Landmines, almost every region in the world is mine-affected and more than 80 countries are affected to some degree by ERW. Most countries that report casualties are not currently involved in armed conflict: according to the 2015 Landmine Monitor Report, 37 of 54 countries that suffered new mine casualties in 2014 are State Parties to the Mine Ban Treaty.

On top of that, the vast majority of victims are civilians, not soldiers – only 20 per cent of reported casualties in 2014 were identified as military personnel.

Dealing with the problem also presents significant financial challenges, particularly to developing countries. Although the cost of laying mines could be as little as US$3 per mine, the cost of their removal is often more than US$1,000 per mine.

One country grappling with such a stark reality is Cambodia where, despite the end of the war there in 1991, landmines continue to inflict a heavy toll on society. The legacy of three decades of war in Cambodia, a country of just over 11 million people, is an estimated 10 million landmines.

The number of all known landmine-related casualties in the country between 1979 and 2013 was over 64,000. In 2013, nearly 90 per cent of such casualties were civilians. These landmine casualties mean that Cambodia has the highest ratio per capita of amputees in the world.

However, thanks to the efforts of humanitarian landmine clearance agencies in the country, 50 per cent of Cambodia’s minefields have now been cleared. This is hugely important for the economy, as more than 80 per cent of the country’s population live in rural areas where agriculture is the main source of income. According to the HALO Trust (a mine clearance charity), the current landmine threat is mainly in the 21 north-west border districts of the country, where it continues to be an impediment to development as it prevents populations from accessing agricultural land, water sources, roads and other services.

Landmine clearance is often a major and urgent challenge for conflict-affected societies, such as Cambodia, in order to enable their socio-economic and physical reconstruction and sustain the peacebuilding process. Until the late 1990s, the main components of the response to this challenge – mine clearance, mine awareness, victim assistance, stockpile destruction and advocacy – largely occurred in isolation from each other. This changed in 1997 when three leading mine action NGOs;  MAG – Mines Advisory Group, Norwegian People’s Aid, and Handicap International launched the concept of Humanitarian Mine Action (HMA). This approach ensured better coordination among existing mine action activities while also expanding to encompass a wide range of post-conflict recovery initiatives. Since then, HMA activities have continued to widen in scope, keeping pace with the contemporary context within which they operate.

By integrating its activities within the longer term plans of development agencies, HMA has delivered a sustained impact and increase in operational capacity in recent years. In turn, this sustainability has enhanced coherence across developmental platforms and improved assistance to affected communities by harnessing the potential of cross-sectoral support. It is in this context that the clearance of ERW such as anti-personnel landmines could play a significant role in making post-conflict reconstruction more relevant and effective. From the clearance of ERW from agricultural land to the employment of former combatants as deminers, there are some obvious areas of interaction between those processes. 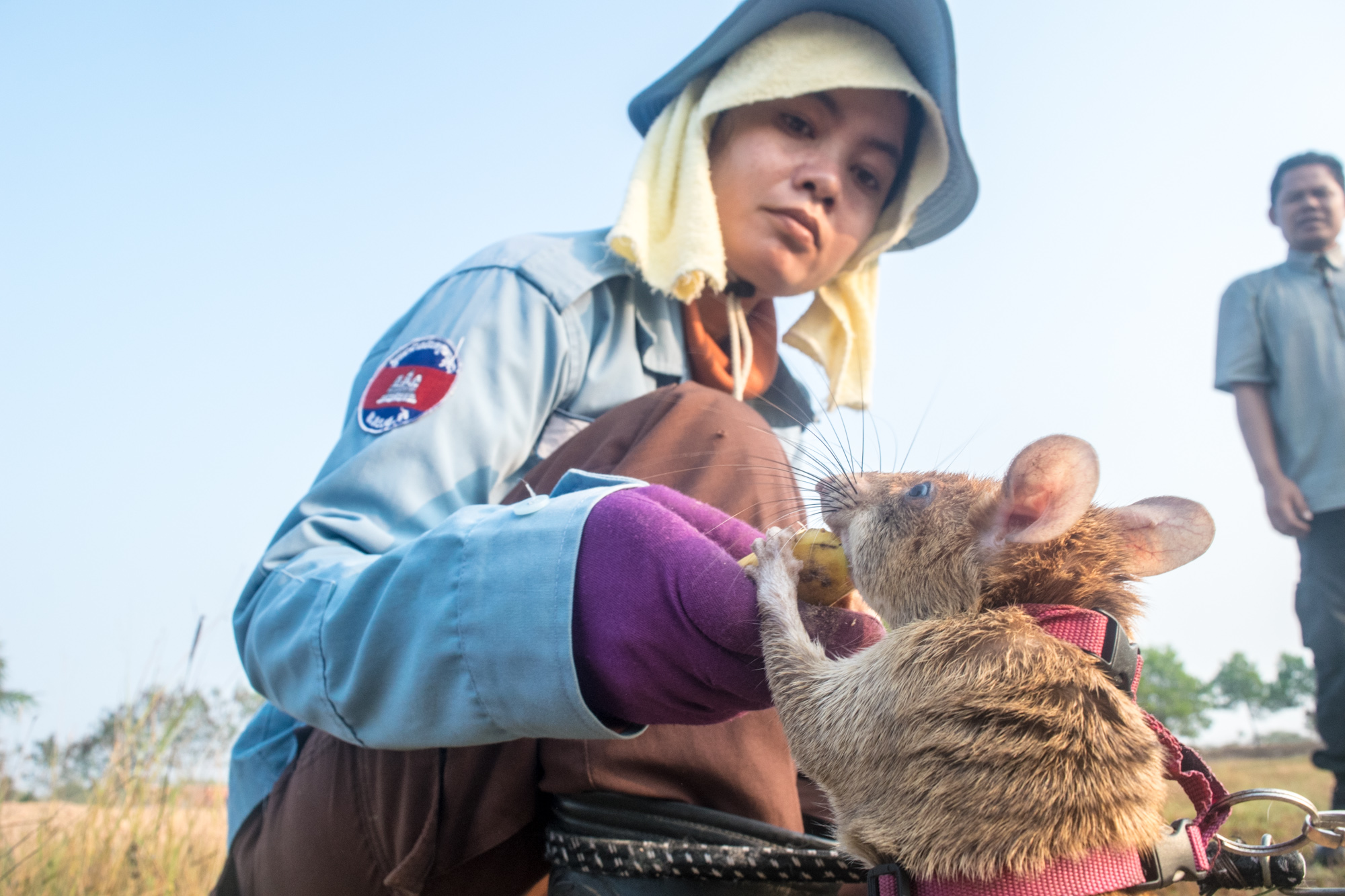 In Cambodia, HMA has championed innovative approaches to landmine clearance such as the HeroRATs program which was implemented by APOPO and the Cambodian Mine Action Centre, involving the training of rats and their handlers. Each mine detection rat is expected to search up to 200 square metres in 20 minutes, something that could take a technician with a metal detector up to four days to complete. The HeroRATs program was successfully used in the clearance of landmines in Angola and Mozambique, and the hope is that it will speed up the landmine clearance process in Cambodia.

However, HMA in Cambodia should consider a wide range of issues beyond the clearance of landmines, such as long-term assistance to victims. Survivors need access to free healthcare programmes, require specific attention to their employment and educational opportunities and assistance with social inclusion challenges. For example, disability in Khmer society has traditionally been seen as a result of a disabled person’s bad karma sentencing them to a life of misery. This can mean victims of landmines not only lose their limbs but also their dignity in society, and are likely to face considerable societal challenges. It is imperative, then, that Cambodia is supported further in this protracted challenge through a comprehensive HMA approach by the international community, both in the clearance of landmines and in responding to the socio-economic and cultural ramifications of this deadly legacy.

Alpaslan Ozerdem is Professor of Peacebuilding and Co-Director of Centre for Trust, Peace and Social Relations at Coventry University, UK.