FIFA’s troubles and Russia’s reputation means western sponsors are showing caution during this summer’s festival of football. But as Simon Chadwick and Paul Widdop write, China hopes to score.

With football’s World Cup just a matter of weeks away, attention is turning towards host-country Russia. Back in 2009, when the country bid for the right to hold the 2018 tournament, it was a rather different place: Dimitry Medvedev was president, oil prices were higher, the Russian economy was booming, and economic sanctions against it had yet to be imposed.

Since then, things have changed dramatically: Vladimir Putin has become a one-man nationalist juggernaut, while Russia has annexed Crimea, engaged in Syria, doped its own athletes, and hacked and trolled its way through elections, sports events and the like. Consequently, in several parts of the world, Russia is now viewed as toxic and best avoided – even at World Cup time.

While Britain’s Foreign Secretary Boris Johnson has barked that nations should boycott the competition, a more tangible outcome of concern for Russia has been a reluctance among companies (even its own) to become a sponsor of world football’s biggest showcase.

Indeed, according to the FIFA website, Moscow has only managed to attract two national supporters – Alfa Bank and Rostelecom – compared to the six local companies that sponsored the 2014 World Cup in Brazil.

For a testosterone-fuelled Russian government, the financial (and reputational) ramifications of its sponsorship problems are probably not of particular significance.

However, the financially unstable FIFA has possibly been rather more concerned. Years of embroilment in corruption scandals have drained FIFA’s coffers and caused sponsors to baulk at the thought of being associated with the organisation.

As such, in recent years several sponsors have jumped ship from FIFA, with Sony and the Emirates airline being two examples.

The combination of FIFA and Russia together has hardly assuaged fears in the boardrooms of some global corporations. Over the last year or so, official World Cup sponsors have therefore stalled on making decisions about how to activate their deals with FIFA.

Into the sponsorship breach has stepped a group of variously opportunistic and strategic new FIFA partners. Where there were once Western household brands such as Gillette and Phillips, now there are new names: Wanda, Hisense, Vivo and Mengniu. The age of global football sponsors from China is upon us.

It was telling that at Sepp Blatter’s ill-fated re-election as FIFA president in May 2015, Wanda’s owner Wang Jianlin sat alongside him as the result was announced. With Blatter soon to be gone from office, it was left to his successor (current president Gianni Infantino) to laud Wanda as its partnership deal with the governing body was announced. In turn, Wang revelled in his opportunism, explaining how he had taken advantage of FIFA’s travails to seal the deal.

Since then, several other Chinese companies have joined FIFA’s commercial roster as World Cup sponsors, the most striking of which has been Vivo. Reports suggest that the telecommunications company may have paid as much as $500 million to become one of world football’s biggest financial supporters.

Gone, however, are the opportunistic days of 2015. Now, China’s sponsors are operating under much closer government scrutiny than was the case during the early years of President Xi Jinping’s newly instigated sports revolution.

With the state concerned about capital flight and a growth in the cult of corporate personality, subsequent Chinese sponsorships have become something more in-tune with Western conventions. Sponsoring the World Cup has always been a good way of boosting brand recognition and enhancing brand recall to help a company sell more products – or so the argument goes.

But this is China – whatever economic rationality underpins a corporation’s decision-making, it is always guided by the heavy hand of the state. Sponsoring the World Cup is no different. Deals with FIFA are as much about building Brand China and securing the country’s World Cup vision as they are about selling milk and mobile phones.

As we have reiterated several times in our analyses of China for Policy Forum and the South China Morning Post, China and its corporate lieutenants are highly adept at creating networks of influence as they seek to pursue ends that are of national importance.

We therefore undertook a network analysis of the four Chinese sponsors working with FIFA to identify the scale and nature of their networks. Our results enabled us to generate the following visualisation, which depicts both their sponsorship deals and their sports ownership interests: (Click to see visualisation) 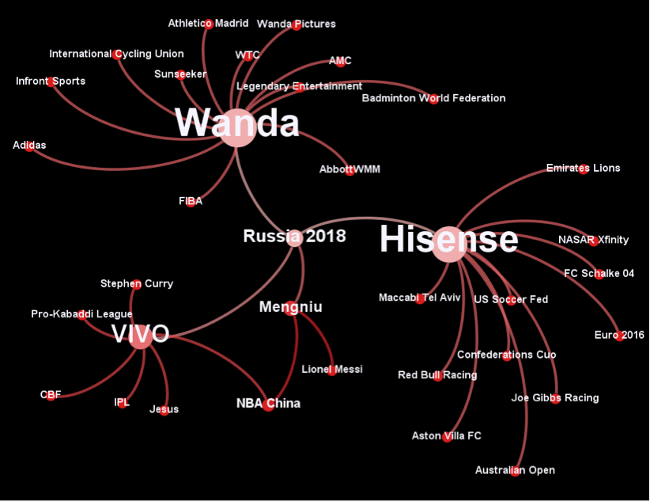 Wanda and Hisense are clearly the major players, in fact, the former has several connections with this summer’s World Cup. Aside from being one of FIFA’s major sponsors, Wanda is partnering with the tournament via its Sunseeker luxury yacht business. It is also the owner of Infront Sport and Entertainment, one of FIFA’s closest commercial allies.

Both Wanda and Hisense are engaged in global sponsorships across several sports, whereas Vivo and Mengniu have smaller, much less developed networks. Interestingly, Vivo appears to be adopting a particular focus on India, an important and rapidly growing marketplace.

This suggests that China’s sponsors and their associations with FIFA and the World Cup are playing the same game as Western corporations: to ensure that the world’s consumers know who they are and what products they sell. We sense there is an element of global acceptability linked to this too, in that China and its businesses are pursuing credibility and legitimacy by sitting alongside the likes of Coca-Cola, McDonald’s, Budweiser and Visa.

At the same time, in terms of broader global supremacy, Chinese corporations are always carefully marshalled by their state. Hence, there is also likely to be an underpinning ideological contest, through which China is confronting the United States as the world’s preeminent economic power.

Politically, China’s approach to creating networks of influence often reveals a compelling story. In this case, the story is the influence China is seeking to exert over FIFA as the country pursues its World Cup hosting ambition.

Russia 2018 will hopefully be an exciting competition on the field of play. But whoever is successful in the final, China and its corporations will be hoping that they prove to be the big winners.