If the New Silk Road is to reach Europe, China’s bureaucrats will need to lift their game and more closely communicate policy developments with their counterparts in countries along its path, Tristan Kenderdine writes.

What is today the European Union (EU) began as the European Coal and Steel Community in 1951. Multilevel governance is European state administrative theory that has grown with the EU to describe and define the institutions and public administration powers of the industrial bureaucracy’s multiple levels. China’s New Silk Road through the post-Soviet states will encounter many of the same governance problems that Europe has already solved.

As China readies its five-year industrial policies and coordinates massive financial cooperation and project system funding, a policy transmission gap is emerging: the lower levels of the Chinese government are not connecting with their counterparts in the bureaucracies of economic partner countries. With huge and well-orchestrated plans, such as the one for intercontinental rail, China will face a multilevel governance policy transmission problem without upgrades to its public administration communications infrastructure and protocols.

State Council Premier Li Keqiang was recently in Central Asia talking up the benefits of industrial capacity cooperation and security measures as the development of two trunk rail lines through Kyrgyzstan and Kazakhstan to service the Belt and Road geo-industrial policy continues. While Chairman Xi Jinping has had high profile meetings with the Presidents of Shanghai Cooperation Agreement and Eurasian Economic Union (EEU) countries concerning the Silk Road initiative, the lower levels of bureaucratic implementation and policy transmission have not taken place. This has left many senior policymakers in Central Asia unclear about China’s intentions.

Silk Road blocks: The problem with China’s ‘One Belt, One Road’ policy

In Kyrgyzstan, the Kashgar-Osh rail line would open up a logistics supply channel through Fergana to Samarkand, and south through Turkmenistan to the stable trading partners of Iran and Turkey ending in Istanbul, a natural terminus. For the Kashgar to Fergana Valley rail connection to succeed, China must manage a very difficult set of relationships. The Fergana Valley in both Kyrgyzstan and Uzbekistan is home to Salafism, a school of Sunni Islam, which China’s intellectual, diplomatic discourse is as yet unprepared to deal with. The terrain through the Tian Shan mountains is an engineering challenge in itself. Establishing the logistics lines and achieving institutional integration will be equally daunting diplomatic feats. Kyrgyzstan was benefiting from increased Chinese imports before having to harmonise their trade tariffs upwards upon joining the Eurasian Economic Community, meaning on simple trade metrics, China should be encouraged. However, greater levels of understanding are needed between China and its bordered neighbours to pull off the project. (Click here to see map). 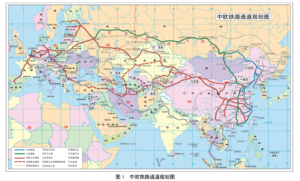 Managing the relationship with Uzbekistan also presents serious difficulties. Uzbekistan faces economic risks due to the closed nature of its economy. Its focus is squarely on employment opportunities for its huge population. For Uzbekistan, the Eurasian Economic Union presents more challenges than solutions, whereas China can offer capital and currency support to a country in grave danger of dollarization if it opens up its economy under the EEU.

Kazakhstan is at an historic crossroads. Its middle-income status, great natural resources and relatively transparent governance make it a global pivot point, in the centreboard of the Eurasian landmass, for the balance of power over energy and water security. Kazakhstan’s government is highly centralised, meaning China can negotiate state-to-state agreements with its long-standing friend, President Nazarbayev, with relative ease. However, it also means that the process of policy transmission and implementation among lower levels of government is difficult, slow and not clearly communicated. A case in point is the signing, according to Dr Meruert Makhmutova, Director of the Public Policy Research Center (an independent think tank in Kazakhstan), of a capacity cooperation agreement involving the relocation of 50 industrial plants from China to Kazakhstan. Beyond that, there was little public information provided about the industries, firms or plants to be transferred. This makes it difficult for the capacity-receiving nation to prepare its regulatory and financial systems for the new industrial influx, and leaves business, which must adapt to new input-output matrices, with no idea of the structural change about to take place. If capacity cooperation is to work, the host nation must be able to adequately prepare.

To balance geo-industrial power between dependence on Russia and instability risks in the Central Asian Republics, it is entirely sensible for China to have two roads to Europe, through both the Russian and Turkic worlds. However, the many sovereign states in between China and Europe, and their people, should be consulted, communicated with, and transparently engaged in building them.

Tristan Kenderdine is Research Director at Future Risk in Kazakhstan