China’s goal to create a domestic sports economy worth $850 billion by 2025 means that football is fast becoming a vital component of an emerging industrial sector,  Simon Chadwick writes.

If recent reports are to be believed, we are a matter of days away from AC Milan finally revealing who its new owners will be. The club announced some weeks ago that it has been sold to Chinese investors, even though there is still some mystery surrounding the club’s acquisition price.

This mystery is symptomatic of stories that have swirled around the Rossoneri for months. Reports have variously identified search engine Baidu, alcohol brand Maotai, and conglomerate Alibaba as being the prospective buyers of one of Italy’s best-known and most iconic clubs.

At the same time, rumour and counter-rumour have left fans of English clubs West Bromwich Albion (of the Premier League) and Wolverhampton Wanderers (of the Championship, the tier below the Premier League) bewildered by the array of possible new owners reportedly seeking to buy their clubs. Over the last week, Liverpool has joined this list, with some reports suggesting that art dealer and entrepreneur Liu Yigian will buy the club, and in doing so make The Reds China’s biggest English purchase yet.

At the time of writing, Albion fans remained enthralled by the prospect that Wang Jianlin, owner of the Wanda Corporation and one of China’s richest men, could be the club’s new owner, while Wolves fans have been on tenterhooks, faced with the possibility that Robin Li of Baidu is their club’s Chinese purchaser.

At the same time, Chinese retailer Suning has recently followed-up its earlier acquisition of Jiangsu of the Chinese Super League, with the purchase of a 70 per cent stake in AC Milan’s cross-city rivals Inter Milan.

In my previous columns for Policy Forum, I have detailed China’s football goals and why it is perhaps no surprise that we have seen several European football clubs being acquired by Chinese investors. However, in the more specific cases noted above, one is still left to ask who these people and organisations are, and what their motives are when buying a club.

A recent report by the BBC highlighted the composition of club owners in the Chinese Super League. (Click here to see chart). 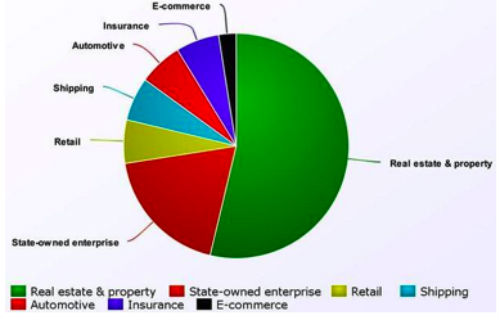 The predominance of real estate investment in Chinese domestic football is significant, especially as we have seen little evidence of such investments in overseas clubs. Arguably the most significant reason for this is that real estate and property companies are effectively dependent upon the state for planning permission. At the same time, in China there is intense competition for land, particularly in urban areas.

Being seen to publicly support the state’s pursuit of its football goals is therefore one way of navigating through the red tape, thereby easing the route towards successfully securing planning permission. It also provides a competitive advantage when companies are bidding to secure use of land. It is surely no coincidence that Chinese football’s most successful recent club (Guangzhou Evergrande) is owned by a real estate corporation.

Real estate management is much less of an issue for Chinese investors in overseas clubs, which explains why other types of corporations have been in the vanguard of recent European acquisitions. Upon securing a 20 per cent stake in Atletico Madrid, Wanda owner Wang explained how Madrid would become a hub in a global entertainment axis stretching from Beijing through the Spanish capital to Los Angeles.

Wanda now owns AMC, the cinema business, as well as Legendary Studios in Hollywood, while recent rumours suggest the company is also considering a bid for Paramount Studios in Los Angeles. Given Wanda’s additional ownership of Infront Sports and Media, and Ironman Triathlon, it becomes clearer that Wang sees football as an entertainment product, part of a vertically integrated global business empire.

There are some similarities between Wanda, and Baidu and Alibaba, albeit that the latter two have core businesses that operate in digital spaces. Baidu is best known as a search engine, while Alibaba started out as an e-commerce company. Given the voracious appetite of new Chinese consumers for online consumption and social media, it is inevitable that both need content to drive their business models. Football provides this content and is a proven point of engagement for users.

Aside from Alibaba’s ownership stake in China’s Guangzhou Evergrande, it remains to be seen whether either company will acquire a European club. This contrasts with Chinese electrical retailer Suning, which owns both the Chinese Super League’s Jiangsu club and Italian Serie A’s Inter Milan. Stories continue to circulate as well that Suning is bidding to acquire player agency Stellar (which, among others, represents Real Madrid’s Wales star Gareth Bale).

Suning’s ownership of two clubs and, potentially, an agency that could represent players moving between them poses some interesting ethical and governance issues. That aside though, one is left to ask why a high-street store chain seems intent on creating an integrated football supply-chain business?

The answer is: probably for the same reasons as Wanda, Baidu and Alibaba. Suning.com is one of China’s largest e-commerce platforms, while its stores sell electrical items such as computers, televisions and so forth. Strategically, Suning’s rapid, decisive moves into football indicate that the business seems intent on creating and managing the content that fans and consumers can access via the equipment they can buy in Suning stores.

China Media Capital (CMC) is probably best known in football for its £265 (USD $350) million purchase of a 13 per cent stake in English club Manchester City. City’s existing ownership structure (the club was bought by Abu Dhabi’s ruling family in 2008) implies that Chinese investment in the club has a geopolitical and strategic dimension to it. Given Abu Dhabi’s oil reserves, which China presumably wants access to, the tie-up seems logical.

The relationship seems even more logical given that CMC is a state-backed firm, effectively an organisation that represents China’s investment interests abroad. At one level, CMC is therefore something akin to a sports sovereign wealth fund, which has been set up to engage in long-term, revenue-generating investment opportunities. At another level, the firm appears to have been tasked with identifying properties in which to invest that are likely to have a significant impact upon the development of football in China.

Beyond the politics, and China’s corporate juggernauts, other Chinese businesses are taking an increasingly intense interest in European football. Several weeks ago, Tony Xia and the Recon Group acquired Aston Villa, a club recently relegated from the English Premier League. Xia joins the likes of Hui Wang and United Vansen International Sports at Den Haag in the Netherlands, and Li Wing-Sang of Ledus at Sochaux in France, in acquiring a European football club.

The peculiarities of running a business in China means that such companies and their owners are likely to benefit from them contributing to the national football effort. One might call this corporate or state-level guanxi. Investor intentions, though, are not always political or indirectly commercial, as there are likely to be other motives too for their sudden engagement in football.

One reason is that, given China’s goal to create a domestic sports economy worth $850 billion by 2025, football is fast becoming a vital component of an emerging industrial sector. However, at the same time, the financial value of sports properties in China is booming, something that concerns investors. As such, what has been termed by some observers as ‘hot money’ is being invested offshore to mitigate risk in the event of the Chinese sports market over-heating.

Critics might interpret the phrase ‘hot money’ as being a euphemism for something more unsavoury. In this respect, the case of Carson Yeung, who bought English club Birmingham City in 2009, is proving to be unhelpful to the new wave of Chinese investors.

Indeed, with Yeung in mind, the response of Europeans to the likes of Xia has been polarised. While some fans see the promise of Chinese Yuan being a saviour for their clubs, others adopt a rather more literal interpretation of ‘hot money’. Suspicions in Europe remain that Chinese investment is the vehicle for something which, at the very least, could be unethical.