Donald Rumsfeld is not my favourite role model as a policymaker, but there have been few more articulate descriptions of the difficulty and complexity of real-world problem-solving than his famous statement in the course of a press briefing in 2002 that:

Far from being incomprehensible gobbledegook, justifying the ‘Foot in Mouth of the Year’ award that it received at the time, this is in fact a perfectly lucid and accurate account of what can go wrong in policy decision-making in any context, at any level.

The one thing for which Rumsfeld can be criticised in his statement was that he left out what is often the most dangerous type of unknown: the ‘unknown known’—as someone once put it ‘What you think you know that just ain’t so’. In fact, the press briefing in question was on the issue of weapons of mass destruction in Iraq, and it was the Bush administration’s certain knowledge of what just wasn’t so—that Iraq actually continued to possess such weapons—that led Rumsfeld and his colleagues to undertake the disastrous military adventure that they did.

There are many areas of public policy which are full of the most complex and intractable problems, not least this area—my own—of peace and security.

Right now the most troubling international policy problem is the carnage in Syria—with after two years of civil war 80,000 men, women and children dead, and another 6.8 million in need of urgent humanitarian assistance: 4.25 million displaced internally, and nearly two million refugees in neighbouring countries. 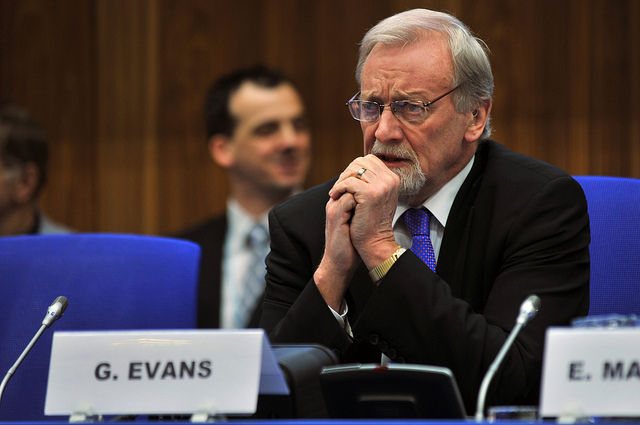 Not the least of my own reasons for distress about the international policy paralysis on Syria is that I was one of those who helped to develop the new norm of the ‘responsibility to protect’, unanimously embraced by the UN General Assembly in 2005 and effectively implemented subsequently in cases like Kenya and Libya. This was intended to ensure that the international community never again stood by impotently while mass atrocity crimes (major crimes against humanity and war crimes) were committed behind state borders—yet in Syria over the last two years such crimes have been committed over and again with apparent impunity.

This is a problem crying out for a solution, but the trouble is that every solution so far advanced has either been:

The only credible solution is a diplomatic one—in which both regime and rebels, pressured by their respective supporters, compromise on a transitional governing process. But, one has to be a supreme optimist to think that the chances of implenting this in practice within the next few months are more than negligible.

I don’t know whether Syria satisfies the currently accepted academic definition of a ‘wicked’ problem, but with serious downsides to every possible solution, it looks pretty wicked to me.

The presentations at Public Policy 2013 wrestle with situations of at least equal complexity and difficulty in other contexts—in the areas of climate change policy, alternative energy sources, disaster response, and the general problem of translating credible scientific research into effective policy action.

The underlying issue that runs through the conference proceedings is whether the capacity to deal (or at least begin to deal) with problems of great complexity and intractability is just a matter of judgement and experience—judgement which you either have or you don’t, and experience which can take a very long time to acquire—or whether rather the necessary skills can be taught and learned.

Professor Gabriele Bammer argues that we can do a better job of preparing future policymakers for their role through problem-based research and education, further work on the theory and method of dealing with complexity, and on bringing together knowledge and insights presently dispersed across different disciplines.

I’m not sure that I’m yet entirely persuaded by all the elements of this argument. But, I am certainly totally persuaded that universities have a crucial contribution to make, in multiple ways, when it comes to public policy-making: in generating evidence-based data; in developing rigorous analytical skills; in encouraging out of the box creative thinking about solutions; and in bringing together academics and practitioners, and those from multiple disciplines, to tackle complex problems from multiple angles.

And I am totally persuaded that there is no better university in Australia to play these roles than ANU, with its national charter, national capital location, huge reputation for intellectual excellence, and long tradition of major contribution to public policy debate.

The world’s great universities are those that are great in three dimensions: traditonal teaching and learning and the total student experience that goes with it; traditional research and the contribution to scholarship that goes with that; and outreach and engagement with the wider community, particularly in policy-focused research.

ANU satisfies all those criteria. We are working hard to give particular new weight and emphasis to the third of them, including by:

I am very proud as Chancellor of this great University of everything that ANU, with Crawford School as its new focal point, has been doing, and will continue to do, to improve the quality of public policy both in Australia and internationally, and am delighted to have been asked to help set the scene for what I know will be a fascinating and enriching day of presentations and discussion.

Professor the Hon Gareth Evans AC QC FASSA has been Chancellor of The Australian National University since January 2010. He was a Cabinet Minister in the Australian Hawke and Keating Labor Governments.