Could nuclear be a power of good?

Australia’s energy future is at a crossroads – will it turn towards nuclear power?

Australia has the opportunity to consider nuclear power as a second, low-carbon option alongside renewables to enable more rapid decarbonisation of the economy. Will it take it?

Australia’s energy future is at a crossroads.  The nation has abundant energy resources:  fossil fuels, renewables and uranium for nuclear power.  Because Australia is blessed with abundance, in the past there has been no driver to make critical choices between these sources, and the apparent least-cost route was taken.

However, in response to climate change, the real (and hidden) costs of future climate impacts need to be factored into fossil fuel sources, with renewables and nuclear being the remaining options.  At this time there is no legislated opportunity for nuclear power to contribute.  Nevertheless, Australia needs to decide whether to use nuclear power to speed up climate change mitigation in order to avoid the higher future costs of delayed climate action.

Recently the South Australian Government made a landmark decision:  it established a Royal Commission into prospects for the state to participate in the nuclear fuel cycle.  This includes the mining and pre-processing of uranium, nuclear electricity generation, and the processing and storage of nuclear waste (domestic and potentially from overseas).

This isn’t the first time that a review of nuclear fuel cycle has been undertaken in Australia.  In 2006 the Howard government presented the Uranium Mining, Processing and Nuclear Energy Review (UMPNER).  More recently, in 2012 and 2013 the Australian Energy Technology Assessment (AETA) by the Federal Government Department responsible for energy evaluated the levelised cost of producing electricity (LCOE) for 40 technologies, including large-scale (~1GW+) and small modular reactor (SMR < 200MW) nuclear power.

The methodology included fuel and operational/maintenance costs, the generating capacity factor, and the initial investment cost amortised the over the lifetime of the plant.  The LCOE then enables comparison of ‘plug-and-play’ replacements for existing electricity generating stations.  However, if the resource site is at a remote location (as is the case for some renewables), then the additional cost of distribution network infrastructure needs to be factored in. 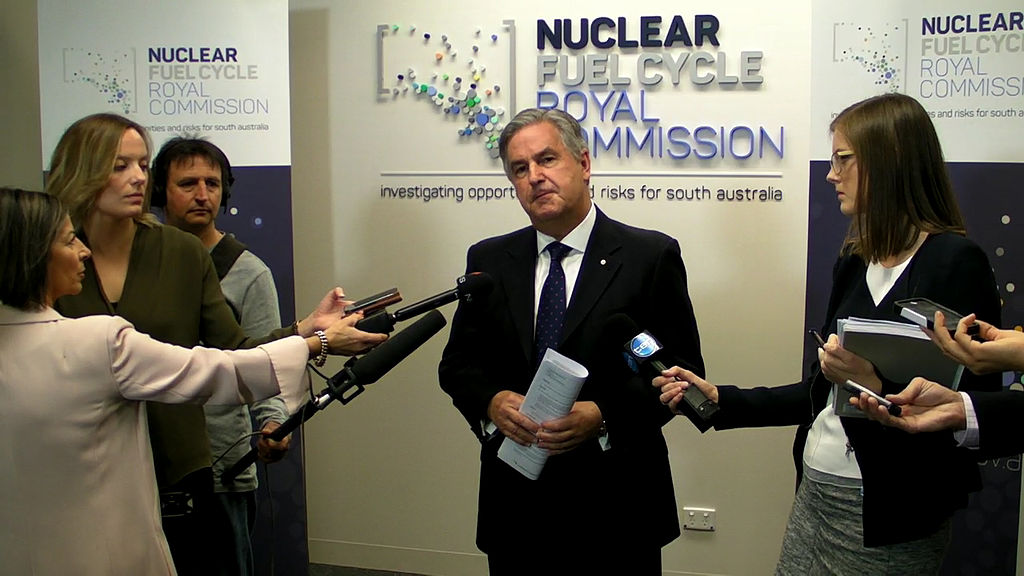 The AETA study showed that in the coming decades nuclear is competitive with – but slightly more expensive than – renewables.  This advantage for renewables disappears if the cost of additional network infrastructure is included, as shown in the Australian Energy Market Operator (AEMO) study 100% Renewables.  The AEMO work indicated that although the Australian National Electricity Market is one of the most extensive and geographically distributed in the world (which favours access to distributed renewable resources to address intermittency), additional infrastructure is still required to capture the required renewable resource.

In addition, the AEMO study relied heavily on geothermal and concentrated solar to provide ‘baseload’ capacity at times when wind, solar PV and other renewable output did not match demand.  This is a role that could also be played by nuclear where it has a proven track record.

Adoption of nuclear energy is technically feasible in Australia, which has abundant uranium reserves, a stable system of government and a considerable capacity to store nuclear waste on a geologically stable continent.  However, a significant investment will be needed to create the social license to operate nuclear power in this country.  This will require bipartisan political support, public education, and empowering of communities to create confidence in modern technologies.

The public needs to be convinced that the latest nuclear technology is safe, that waste disposal is practical and that the regulatory and governance structures to ensure that it remains safe are of a high standard.  A low-barrier entry point might be to allow installation of a SMR for a remote, energy intensive mining project (with scalability by adding other modules as required) that could provide a test-bed for public acceptance.

One step towards obtaining the social license to operate is the SA Royal Commission.  This respected and independent review process will be closely watched by all interested parties to see how the prospects for Australian participation in the nuclear fuel cycle pan out.  The recently (April 8) released Federal Government Energy White Paper states:

“The Australian Government will consider the outcomes of the South Australian Royal Commission into its future involvement in the nuclear fuel cycle including the mining, enrichment, energy and storage phases for the peaceful use of nuclear energy. The Royal Commission will allow for a considered and informed community discussion on nuclear industries and energy, examining the opportunities and the risks.”

Australia now has the opportunity to consider nuclear power as a second, low-carbon option alongside renewables to enable even more rapid decarbonisation of the economy.  Indeed, Australia’s strong record of good governance may place it in a central position to become a contributor more generally in the global nuclear fuel cycle.

Professor Andrew Stuchbery is Head of the Department of Nuclear Physics, The Australian National University, and Convenor of the ANU Master of Nuclear Science program.