New cases have emerged in a number of Pacific countries, whilst the region’s economic downturn has been labeled a ‘humanitarian crisis’ in the wake of COVID-19, Hugh McClure writes. 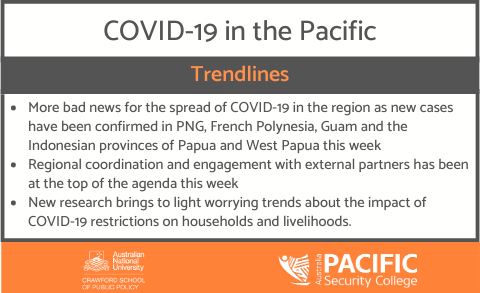 he Week in Review

Two more cases of COVID-19 have been confirmed in Papua New Guinea this week, bringing that country’s total to 11. Both cases are located in Port Moresby, with the first case being a 27-year-old PNG Defence Force soldier based at the Murray Barracks, and the second case being a close contact of the first. The barracks have been sprayed and sanitised as a result.

In response to the new cases, Controller David Manning has said that there is now evidence of community transmission in the National Capital District (NCD), prompting Health Minister Wong to dismiss rumours that a localised lockdown may be called for the NCD. With the spike in cases in Port Moresby, officials in Bougainville have pleaded with travelers from PNG to be mindful of COVID-19 restrictions in Bougainville in the lead-up to elections, noting that although the State of Emergency has expired in PNG, Bougainville remains under a State of Emergency until mid-August.

Elsewhere in the region, after close to two months without recording an additional COVID-19 case, two cases were confirmed in French Polynesia this week, with both being under quarantine after returning from France. The total number of cases in Guam has reached 253, while 1669 cases have been recorded in Papua Province and 237 in West Papua Province.

Regional collaboration and engagement with external partners has been at the top of the agenda for Pacific island leaders this week. The Fiji Hotel and Tourism Association put their disappointment on the record this week at signaling from the Australian government that travel looks unlikely to resume this calendar year, labeling the decision a “worst-case” scenario for the Fijian economy.

While Australia and New Zealand have been cautious around Fiji’s proposed Bula Bubble, Melanesian leaders met this week through the Melanesian Spearhead Group to discuss a potential Melanesian travel bubble. Meanwhile, Pacific Islands Forum Secretariat Director-General Dame Meg Taylor this week issued an update on the Pacific Humanitarian Partnership for COVID-19, outlining that coordination in the response effort was resulting in PPE and testing equipment being appropriately distributed in the region, with Fiji, French Polynesia, PNG and New Caledonia receiving supplies.

New Zealand has noted in a Foreign Policy Re-Engagement Strategy Cabinet Paper released this week that it will need to scale-up its support to Pacific security challenges, listing stalled progress on climate change, transnational crime and the COVID-19 recovery as primary concerns. With repatriation efforts ramping up around the region, including in the Solomon Islands, NZ Defence Force airplanes have assisted to repatriate ni-Vanuatu seasonal workers in New Zealand. Similarly, the NZ government has stated that it is open to assisting with repatriating the 400 Samoans currently stranded on 17 cruise ships.

New research released this week has brought to light worrying trends about the impact of COVID-19 related policy and restrictions on households and livelihoods in the region. In PNG, a UN survey of small and medium enterprises (SMEs) across all 22 provinces has reported that 75 per cent of businesses have been adversely impacted as a result of the COVID-19 pandemic and associated policy response.

Similarly, in Fiji, the CSO Alliance of civil society groups is calling for urgent action to respond to what it has labeled a growing humanitarian crisis in the country caused by COVID-19-related job losses, weakened food security, poor access to health, education and other essential services. The alliance reports that 70 per cent of people in the tourist-dependent Western Division are without work. With savings drying up, many households report turning to subsistence agriculture and fishing to meet food needs, with reports of root crop theft increasing. Relatedly, reports of domestic violence are up by 200 per cent.